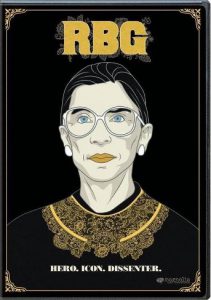 “RBG” premiered at the Sundance Film Festival in 2018 and provides not only an overview of Ruth Bader Ginsburg’s formidable journey from her beginnings in Brooklyn to her notorious work as a U.S. Supreme Court Justice, but insight into the life she lived while making that  journey.

The film discusses Ginsburg’s time as both a student and an educator in the academic field. She attended Harvard Law School before transferring to Columbia Law. After graduating, she taught law at both Rutgers and Columbia. Eventually, she started representing cases that dealt with discrimination— specifically cases that involved gender discrimination. She went before the Supreme Court six times for cases of gender discrimination and she successfully argued five of the cases she represented there.

The documentary does not just focus on the legal battles Ginsburg has fought, it also tells the story of her Jewish American upbringing and details the incredible and supportive marriage she was blessed with. It takes time to show the relationships she has with friends, family, and even those with whom she dissents in the courts. “RBG” also covers how in recent years Ginsburg has come to be recognized as a beloved, if unexpected, pop culture icon. Her passionate work toward ensuring gender equality gained her a large and loving fanbase.

This film displays a thoughtful and compelling look at Ruth Bader Ginsburg and her historic career. For anyone looking to tackle the world, “RBG” is an inspiring starting place. Find a copy of this film in the Bellevue University Library’s collection today. You can check out the DVD for 7 days or stream it through Kanopy.