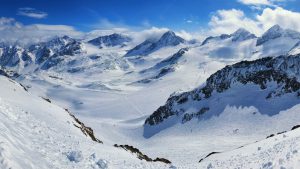 Snow is probably the trademark of winter, If you’re trying to convey cold through symbolism, a snowflake gets the job done. We’re all dreading the first snowfall of the year, we shovel it, we play in it, making snowballs, snowmen, and snow angels. We even make fake snow for decoration, ambiance, and even ski resorts. Because of how ubiquitous snow is, I’m sure we’ve all heard the old rumor that “Inuits had over 100 words for snow”. As a child, I certainly never questioned it, but did you ever stop to think if there was any truth to it? What languages have the most words for snow? Why are there so many terms for snow? These are all good questions, and with a little etymology and linguistics, we can answer them.

First off, let’s address what some linguistics experts call “The Great Eskimo Vocabulary Hoax”. Not only is “Eskimo” an outdated and offensive term, but Inuit languages only contain about 50 words for snow, and these are spread across multiple dialects. A dialect, while still considered part of a language, can’t just be grouped in with all other dialects and treated as if they’re the same. Nobody ever really fact-checks this urban legend, though, so a true idea of how many Inuit words for snow there are vary; e.g. someone might say 500 words, some might say 300, just to come up with a big number that sounds surprising. 50 words for snow is pretty significant, but nowhere near the numbers schoolyard rumor makes it out to be.

So what languages have a lot of words for snow? This answer is pretty straightforward. Many languages that build words by compounding words, or just combining two words to form a new one, often have the most words, as well as the most specific words. Swedish is an example of such a compounding language, with words for snow such as “Aprilsno” referring to snowfall in April, or “Lappvante” referring to thickly falling snow. Thus, the Swedish language contains about 25 words for snow.

The Sami, the indigenous peoples of northern Europe, boast about 180 words for ice and snow. Being far north and having a culture historically built around trapping, hunting, and fishing, it comes as no surprise that their language would contain such specific language to refer to their surroundings. Some of their words for snow are “skava”: a thin layer of frozen snow, “vahca”: new or loose snow, and “guoldu”: the clouds of loose snow blown up by the wind. Their words aren’t built compound like Swedish snow words, but you can tell that they have a lot of the same root words and are built off each other.

The champion for most words for snow, however, might come as a surprise: Scots! Scots claims to have 421 words for snow, which is a fact that’s somewhat disputed by language experts. This is partially because a lot of the list is compound words, like discussed above. It’s also because the words pertaining to snow draw rather broad strokes. A Scots language lecturer, Dr. Suzanne Rennie quotes, “The 421 words are all sorts of things to do with snow- the way it moves, the type of snow, types of snowflake, types of thaw, …the way it affects animals…”. While this might diminish any official count one would try to give Scots, 421 words for or pertaining to snow is still no small feat.

So why are there languages with so many words for snow? Well, this is a fairly easy question to answer. All the above languages and cultures developed in colder areas. Their language developed more words for snow, treating different types of snow more specifically, because their way of life revolved around snow much more than most other languages or cultures did. This is the same reason why more equatorial cultures have language that is more specific to rainy or hot weather patterns, plants, and wildlife. A language develops and grows into its environment, so it only makes sense that places with more snow would have more words for it. Even parts of America receive large amounts of snow, hence a snow-word count of around 40.

Now when you hear someone spreading the rumor about different cultures having absurd amounts of snow words, you know better and can correct them (if you so desire). I implore you to look up some of the words for snow and their meanings! Learning more about language can really tell you a lot about a culture, its history, its priorities, even with something as simple as snow. Who knows, you might even learn a word or two for snow that you can use later in life!