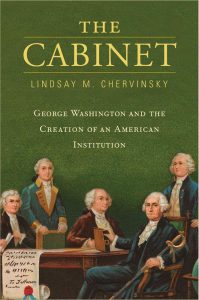 The Cabinet describes the experiences, events, and history of the nation’s first cabinet during the eight years of George Washington’s presidency and the precedence it set during the Early Republic. The author, Lindsay M. Chervinsky, put it quite eloquently, “The cabinet stood at the center of almost every major development during the 1790s and reveals the power and importance of the executive branch in the Early Republic.  It was the product of the first office holders and reflects their backgrounds and governing experience. It emerged in response to the international challenges, domestic pressures, and pervasive anxieties about the future of the Republic. The formation of the cabinet thus embodies the emergence of the United States.  And—like the United States–it might not have survived at all” (p.12).

The first cabinet was made up of men that George Washington could trust and had prior experiences as executives at the state level or higher during the era the Articles of Confederation were in place. Each man’s experiences reinforced the need for a strong executive. Those first secretaries featured Henry Knox as Secretary of War, Edmund Randolph as Attorney General, Thomas Jefferson as Secretary of State, and Alexander Hamilton as Secretary of the Treasury.  Knox and Hamilton had served under Washington during the Revolutionary War. Jefferson was a friend and fellow member of a planter class in Virginia.  Randolph had been Washington’s personal attorney for 20 years. Both Virginian secretaries had been governors of the state.

Washington held the first cabinet meeting with the department secretaries on November 26, 1791, and by start of 1793, he only held nine cabinet meetings (p.163).   Article II Section 2 of the Constitution authorizes the executive to request written advice from the departmental secretaries (p.164). Upon taking office Washington requested written updates and advice from his secretaries.  The cabinet would truly find its role within the federal government in early months of 1793 with the Neutrality Crisis and later in 1794 with the Whiskey Rebellion.

Chervinsky explores how Washington used the cabinet to develop precedent for the Executive Branch, which had not fully been fully described in the Constitution. The departmental secretaries looked for ways to give the president more authority over both domestic and foreign issues. However, Washington was dismayed as Hamilton and Jefferson had begun to hate each other in 1793 and were beginning to create rival political philosophies that would lead to creation of the two party system with Hamilton’s Anglophile Federalist Party and Jefferson’s Francophile Republicans.

Most current books that discuss the Early Republic focus on only one of the men or women that defined the era, but Chervinsky’s exceptionally well documented work takes a look at small group of men whose collective actions helped establish the powers of the president and cabinet’s place in the government.

This book can be found in the General Collection at the Bellevue University Library and can be checked out for 21 days.