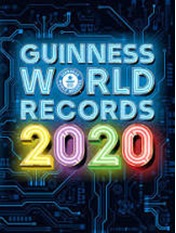 When you think about “world records,” most people immediately think “sports.”  However, librarians are probably more familiar with the Guinness Book of World Records, published annually since 1955, acknowledging record-breaking human achievements.  Today, November 18, 2020, is “Guinness World Records Day.”  Celebrated every November, this day was first recognized in 2004, when the publication became the world’s bestselling book.  However, some believe it actually goes back to November 10, 1951, when Sir Hugh Beaver, manager of Guinness Breweries in Ireland, argued about the fastest game bird in Europe.

The Guinness World Records book is so popular that it has sold over 100 million copies, has been published in more than 100 countries, and translated into 23 languages.  In addition, their online database consists of more than 40,000 records; however, they only include 15,000 records online, which are updated weekly.  The book and online versions contain categories, each category has subcategories, and within those subcategories, there are more categories…get the picture?  Check out some of these fascinating world records:

Do you have a dream of becoming a record-holder?  If you could, what would it be?  Did you know you actually receive money for breaking an existing record and even more if you set a record?  So, if you decide to pursue this, be patient—it does take approximately 12 weeks for a reply.  Below are resources to help you get started and/or learn more about the Guinness World Records fascination.