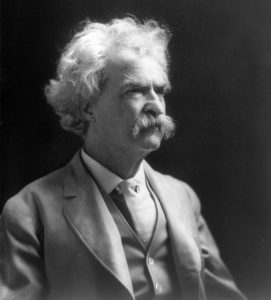 With November coming to a close, Thanksgiving passed and the holiday season in full swing, it’s easy to forget that Mark Twain’s birthday is November 30th. Born under Halley’s comet in one of the coldest months of the year, Mark Twain was one of the first great American authors, he left a tremendous impact on the literary world. His stories and memoirs fused wild adventures with a novel sense of humor, but this style comes as no surprise once you know a little more about his storied and eventful life.

Mark Twain was born Samuel Clemens on November 30th of 1835, in Florida, Missouri. He was the sixth of seven children, but only three of his siblings survived their childhoods due to health complications and illness. Samuel himself was born premature, and was a rather sickly child until roughly the age of ten. Their family wasn’t particularly well-off, so they moved around a bit in order to find work and perhaps a better life. His father managed a store, bought some land, and even became a judge. This didn’t last terribly long, however, as his father died when Samuel was only 11.

A year after his father’s death, he quit school after only fifth grade and went to work for his brother as a typesetter. He followed a typesetting career across eastern America, working in St. Louis, New York, and Philadelphia, among other places. He would work in the day and visit libraries in the evenings, continuing his own education and gaining a greater cultural understanding of the areas he lived in.

From there, he pursued getting his pilot’s license to fulfill a childhood dream of working on a steamboat. It took him two years of apprenticing and studying, but eventually he got the role and made many trips up and down river between New Orleans and St. Louis. This is also where he got the name “Mark Twain” from, as it was a call for when the boat was in clear water. “Mark” referring to the fathom marks on the poles they used to check how deep the water was, and “Twain” as old slang for “two”. It was also the moniker of the captain he worked with on the steamboats for many years, Captain Isaiah Sellers. Sellers used to sign his correspondences “Mark Twain”, and the two became close friends during their work together. Even after Samuel left the boating business, they stayed in contact as much as they could until Sellers died. Upon his death, Samuel Clemens took up the name “Mark Twain” for his writing, “inheriting” it from his close friend.

Now that the name origin has been explained, just for clarity’s sake, I’ll refer to Mark Twain as his moniker. Mark got out of the steamboat business shortly after the death of his younger brother, Henry. Mark had encouraged Henry to join him in the steamboat business, and they worked together for some time. However, Henry received traumatic injury at the hands of an exploding boiler, and later succumbed to his injuries. Mark blamed himself for his brother’s death, and it followed him for the rest of his life. He didn’t quit piloting immediately, but in 1861 the Civil War broke out and he had to seek work elsewhere.

After the Civil War brought steamboat travel to a halt, Mark headed to Nevada to work once more for his older brother, Orion. They traveled to Utah, across the great plains, and Mark eventually found himself back in Nevada, working as a miner on the Comstock Lode. The Comstock Lode was a massive vein of silver that started a bit of a silver rush in the area, and caused towns to boom in that are of the Southwest. After trying and ultimately failing at being a miner, he fell back on what he knew and went to work for a local newspaper, the Territorial Enterprise.

From there he moved to California, found new and similar positions at different newspapers, and started to make more and more connections in the literary world. Mark found his first major success in his story “The Celebrated Jumping Frog of Calaveras County”, published in The Saturday Press in 1865. It gained him national attention, and soon he was travelling, giving talks and having his works published all over the place. Such works as “Tom Sawyer”, “Huckleberry Finn”, and various tales and memoirs of his early life sold like hot cakes all across the continental United States. This level of success brought a fair bit of wealth with it too, but unfortunately that didn’t last him too long.

Unlike most authors, Mark Twain didn’t lose his money to gambling, or drinking, or the many vices which plague creatives; rather, he lost his fortune to investments. Twain invested hundreds of thousands of dollars into the Paige typesetting machine, but before it was perfected for a market audience it was made obsolete by the Linotype. Twain lost almost all his money in this misadventure, and spent the next few years scrambling for money. He made enough to get by on the royalties from his books, but most of his new works during this time felt rushed and forced as they were obvious money grabs.

Eventually he pulled himself out of his tailspin, especially with some help from his friend Henry Rodgers, but not before selling his house, moving his family, and spending years writing, travelling, and giving talks and speeches to recover as much income as he could. He declared bankruptcy at his lowest point, as advised by Henry. Henry then took over control of his finances, and he could work on regaining some savings without worrying about debt collectors. However, even though he no longer had to since he declared bankruptcy, Twain made good on all his debts once he had the money again.

He spent the final decades of his life traveling and giving talks, as his life and experience had made his speeches highly sought. Many of them were humorous in nature, not too different from what today we’d call stand-up comedy. He traveled to schools, country clubs, and town halls, sharing his point of view and story.

The impact Mark Twain had on early humor, Americana in literature, and just the art of storytelling in general lives on to this day. One of the great authors of our modern world, and he had the life to back it up. Hopefully now you know a bit more about Samuel Clemens, “Mark Twain”, and just how colorful and varied a life he lived.