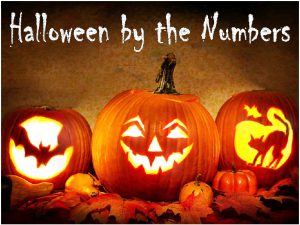 The origin of the holiday comes from the night before the Christian day, All Saints’ Day or All Hallows’ Day. This is a day to commemorate the saints of the church, those who are known and those who are not known. The name Halloween derives from All Hallow’s Eve (the night before All Hallow’s Day), which in Scottish eve is even, and is often contracted to e’en or ‘een’. The reason for the ghouls and the skeletons is because this is the final night they have before they’re scared away by the saints.

Despite Halloween only being one day a year, there is a huge market and the numbers are shocking. With the holiday being celebrated internationally and a notably high interest, a significant amount of money is spent for Halloween and plenty of time is used carving pumpkins and decorating houses.

What People Spent Per Year on Costumes, Candy, Decorations and Cards

Getting Social with Halloween
933 million ideas will be pinned for Halloween in 2019, up from 273 million in 2015
227 million searches each year for Halloween-related content on Pinterest.

Now that you know the numbers about Halloween, go out and grow the Halloween economy for 2020!