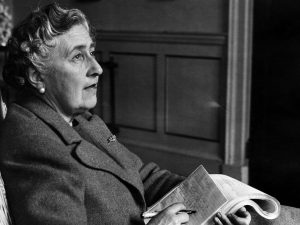 Agatha Christie is an easily recognizable name these days. You or someone you know has undoubtedly heard of her works, seen a film adaptation of Murder on the Orient Express, or seen the TV adaptations of her Miss Marple or Hercule Poirot detective mysteries. She is the most-translated author to this day, and her book And Then There Were None remains one of the highest selling books of all time. She has been given monikers and accolades such as “the queen of crime” or “the queen of mystery”, and her legacy lives on in her 66 detective novels and 14 short story collections published in her lifetime. However, how she got her start and the compelling details of her storied life remain a mystery to so many.

Christie was born Agatha Mary Clarissa Miller, on September 15th, 1890, to a somewhat well-off family in Devon, England.  She was the youngest of three children, and was the only one of her siblings home-schooled in her early years. According to an anecdote Christie shared in an interview, she was such a curious child that she had learned to read by age four. She absorbed schoolwork eagerly, and particularly enjoyed math. She was also taught music, including basic piano, mandolin, and vocals/singing. Throughout her childhood, however, her father had a heart condition that gradually worsened. He eventually died when she was 11, at which point she decided her childhood was over.

With the father dead, the family’s finances became more strained. Her sister married and moved, her brother joined the forces and went abroad, and Agatha was left alone with her mother. Unable to continue homeschooling, she attended various boarding schools but always had trouble adjusting from the freedom she used to have from home school. The schools focused on the instrument and vocal training she had tried as a child, but she gave up on that goal after realizing she had no true passion for it. Her true passion lay with reading and writing, all the way from her early childhood. Some of her favorite authors were Lewis Carroll, Walter Scott, and Charles Dickens. She had written a little in her younger years, but never had given it the full attention she wanted to.

Once leaving school, she took her mother to Egypt in hopes the warmer climate would be good for her. She spent the trip exploring the local tourist spots, attending sports and social events, and taking in the landscape and the people. Once she returned to Britain, she carried on this lifestyle, which eventually found her taking part in theatrical productions and other creative pursuits. Her first earnest attempt at writing came soon after, with “The House of Beauty”, written at age 18. It would later become “The House of Dreams”,  but in its early state it was turned away by every publisher it was brought to. She tried pseudonyms and connections, but to no avail.

Her second attempt at writing was given to a publisher a friend referred her to, and was once again rejected, but this time with the offer of letting her try again. This bit of hope was enough though, and soon enough she was signing her first publishing deal for the detective novel The Mysterious Affair at Styles. Her persistence paid off, and this first story opened the floodgates to her writing career. She had no shortage of deals, offers, and publishers accepting her writing.

Shortly before marriage, Agatha married Archibald Christie, a man she had met at one of her social events. They had a child together, and had traveled the world as part of a promotional tour for Christie’s work. They were happy enough for a while, but this ended when Christie’s mother died. Christie had been very close to her mother, and the loss hit her hard. She spiraled into a deep depression, during which her husband drifted away from her and to another woman. Agatha finally reached a breaking point and left.

They found her car with some spare clothes and little else on the side of a road, and Agatha herself had gone missing. It became a huge headline, and people looked for her far and wide until she was discovered at the Swan Hydropathic Hotel a week later, a spa of sorts. She claimed to have no memory of what happened, other than that she told the staff of the spa to turn away visitors or anyone looking for her. Upon leaving the spa, she filed for a divorce with her husband. She retained the surname “Christie”, however, since all of her early works were published under that name.

Her career carried on well throughout her adult life, and she eventually remarried an archaeologist and stayed with him until her death. She died January 12, 1976, from natural causes. It was peaceful, and as per her request, relatively private. Her funeral was a small affair, but theaters across the country dimmed their outside lights in her honor. Her works carry on her legacy. She was the first recipient of the Mystery Writers Grand Master Award, was made a Dame in the British government, and even as recently as 2020, had her face minted on a coin in commemoration of her achievements.

Her storytelling and characterization set a gold standard for mysteries and thrillers throughout literary history. If you get the chance, be sure to check out some of her writing. If you do, I’m sure you’ll soon understand just how much of an impact she made on the world of literature, crime novels, and mysteries.