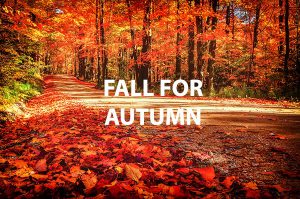 Fall or autumn?  Both are correct, right?  What you call the season between summer and winter is really just based on preference, but why are there even two names to begin with?  I’m glad you asked.  I was curious too, so I began to search for some answers.

In the earliest societies, fall and spring weren’t even really a thing. English speakers considered the year split into two seasons: summer and winter, hot and cold, bounty and hardship. None of this in-between nonsense. In fact, years weren’t even measured by months or seasons at all in the earliest documentation of the world, just by winters. The word “winter” came from a root word meaning “wet,” and “summer” started as “sumer,” meaning “half” (as in, half the year). The two-season year lasted until as late as the 18th century.

The last two seasons to be recognized started with other names altogether. In 12th- and 13th-century Middle English, “lent” was used for spring and “harvest” for fall. They make sense, of course, even if we don’t use these names like that anymore: Lent is really only heard as what Catholics call the 40 days leading up to Easter, and “harvest” is a pretty central theme for fall and farming.

Eventually, “spring” emerged for one season, and “fall” and “autumn” (a Latin word that we lifted from Old French) hung around for the other; “harvest” dropped out. The English sayings “spring of the leaf” and “fall of the leaf” were used poetically to describe the bloom and later withering during these respective seasons, so “fall” ended up sticking as a complement to “spring.”

The recognition of fall/autumn as a distinct season started happening in England right around the time that the American colonies began to separate linguistically from British English. By the 17th century, with American colonies already established, more calls for what was called “spelling reform” began. Ever since the Norman conquest, English had been littered with scraps of French, and it was around this time that prominent writers like James Howell began to ask for sensible wholesale changes to English. These changes were primarily in spelling—logique to logic, for example—but others took things further.

But because autumn and fall became the go-to name of the newly crowned season at around the same time, both terms are used in both England and the United States. To an American, “fall” is the more common word, with “autumn” easily understood but not the norm. In England, the opposite is true.

Why is “autumn” still around, then? Because the British hated “fall.” The English language started spreading to America around the same time that “fall” and “autumn” were battling, so they both ended up making it across the pond; the British decided to simply keep “autumn.”