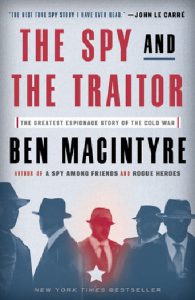 Ben Macintyre’s book, The Spy and the Traitor: The Greatest Espionage Story of the Cold War, focuses on two people, Oleg Gordievsky the spy and Aldrich Ames the traitor. One spied on the USSR for Britain and one spied on the United States for the USSR. Both were traitors to their own homelands. Oleg Gordievsky was one of the most important spies of the Cold War. For 11 years, Gordievsky spied for MI6 against the Soviet Union. In his book, Macintyre talks about the moment every spy has where they face a crisis of faith, where the ideological scales fall from a believer’s eyes and they see the true nature of their home. For Gordievsky that moment was the “Prague Spring.” This event was a turning point in his life and started him down a path that would change his and his family’s lives forever.

For years Gordievsky helped MI6 foil plots, expose Russian spies, and handed over millions of counterintelligence documents. He is considered one of the most successful spies in history. At no time did MI6 ever reveal the identity of their spy to the CIA, which grew more and more determined to find out the identity of Britain’s most upper lever spy. The CIA grew so preoccupied with trying to unmask him that it would lead to Gordievsky’s downfall. This was because the CIA agent assigned to find out his identity was Aldrich Ames. Ames was secretly spying on the United States for the Soviet Union, and he would become known as the one of the greatest traitors in history.

The book delves into the spy world and the secret battle between Britain, America, and the Soviet Union. It takes the reader through Gordievsky’s life, his time as a spy and his amazing escape from Moscow in 1985. It shows the reader what the life of a spy was like, showcasing the adventure, the danger, and the sacrifices. Readers will be enthralled from the moment they start reading until the final page. This book can be found in the General Collection at the Bellevue University Library and can be checked out for 21 days.