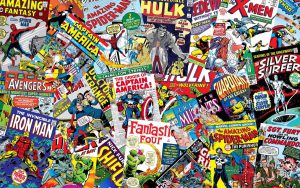 When you see the words “comic book”, certain images come to mind. Brightly colored superheroes and monsters on the cover of a small paper booklet, a stylized movie poster, a collection of cartoons from the newspapers. While comic books and graphic novels did start out in all these smaller mediums, their storytelling and artistry has only grown over the years, and by now they encompass so many genres and styles. National Comic Book Day is celebrated on September 25th, and celebrates the history of the medium and its impact on our culture.

The first “comic book” as we now know it was a Swiss comic called, “Mr. Obadiah Oldbuck”, printed in 1842. It set up the prototypical comic book format, and started a trend of more and more smaller comic books pop up. The first standard-size comic was called “Funnies on Parade”, and was an example of how most early comic books were organized- a collection of “funnies”, short humorous comics, bound together in a short booklet.

It wasn’t until 1938, with the creation of Superman, that comics took off as an American industry. It was the start of the “Golden Age” of comics. Comics from this era are easily recognized as comics we know today, and have a very nostalgic art style. They were very simple stories, action packed and full of suspense that kept readers coming in, and new issues selling out. Superman was the blueprint for the superhero comic, and many others were produced overnight to cash in on the massive success of Superman comics. Not only were the comics entertaining for kids and adults, but they also sprinkled in a little bit of propaganda. Many comics revolved around not fearing atomic power and calming worries around wars and worldwide conflict. It worked, and audiences came to love these early superheroes, as well as the sense of comfort they provided.

The mid-50’s saw the ‘Silver Age” of comics, with heroes like the Flash, and more cool and down to Earth heroes like Spider-Man and the Fantastic Four. Artists and writers like Stan Lee and Jack Kirby saw their heyday, and their comics brought a resurgence back into the tried-and-true Golden Age superheroes. Marvel Comics rose to their own levels of fame, and firmly established themselves in pop culture alongside Detective Comics’ Batman and the classic Superman.

After the Silver Age, comics had thoroughly entrenched themselves into American pop culture, but their fame began to taper off. The “Bronze Age” isn’t as clearly defined, but it lasted from the mid-70’s to the mid-80’s. Much like rock and roll or punk culture, comics quickly became the scapegoat of angry adults, and they were blamed for rises in violence, drug abuse, and juvenile delinquency. This attitude built itself up over the few decades of comic books in America, and early legislation established a Comic Code Authority that had to personally approve every comic that came out. In the Bronze Age, loopholes had been created and comics could once more be released without any censorship or restriction.

In response to this, the comics of the late 70’s and 80’s became much more subversive, with darker adult themes, reference to sex and drugs, heavier topics like racism and political reform, and more bizarre stories. After being restricted for so long, the artists and writers finally had some wiggle room to express themselves, and boy did they. These “underground comics” weren’t sold at regular news stands or corner stores, but in novelty stores, record shops, or “head shops”, shops that sold paraphernalia to younger people.

This movement also led to the rise of “alternative comics”, smaller or independently made comics by amateur artists. Comics in this era really expanded the genre, bringing independent sci-fi, horror, bizarro fiction, slice-of-life, and other narrative styles more into the public eye. Longer comics became a little more common too, popularizing graphic novels in American culture. Nowadays, you can take literature classes in college that exclusively focus on comic books and graphic novels, showing just how far they have come as an art form. It wasn’t until 2011 that all Comic Code Authority rules and regulations had been fully dropped, but by that point comics were fully a part of our popular culture.

Who knows what the future of comic books holds? With how far they’ve come in a little over a century and a half, they will just continue to grow as an art form. This Comic Book Day, think about the history of comics and how it’s an important part of American literature history. Consider rereading an old comic book you remember reading, exploring newer ones in the genre of your choice, or even just reading a couple articles or books about their history.