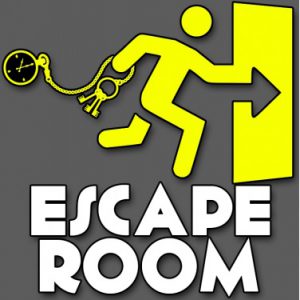 The Bellevue University Library held an escape room in October of 2019. It was the first event of its kind within the library and a huge success. Staff and students participated in this elaborate activity to find ruby slippers. The reason? To escape from Oz. It was only fitting the first escape room for the library was book themed. All participants had great fun trying to find the ruby slippers and escape. Megan McIntosh, who put hard work into creating puzzles and clues for participants, created the escape room. While our escape room did not lock anyone in, we kept true to the nature of the event and gave a limit of clues before time was up. This great event ran for two weeks, ending on Halloween. While many did not win, feedback was overall positive on how much fun everyone had. The event had 21 groups, or 83 participants overall. Out of this, 16 groups were staff/faculty and five were student groups. Of those groups, only eight groups won (or 38%) and the I.T. department, had the fastest escape time of 51.5 minutes. 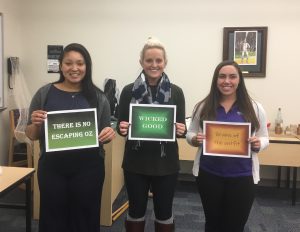 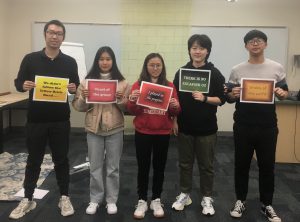 As this was our first run, it also taught the library various things on how to have an “Escape Room” program. First, classroom 460 turned out to be a very good size for an escape room. However, it turned out to be harder to fill up with props than anticipated. The library engagement committee spent almost an entire day putting together the escape room. Not to mention, after each event, the items needed to be put back in place. The existing art hanging up on the walls also needed to be covered up which proved difficult in some instances. For future escape rooms, the committee decided it would be beneficial to have a tapestry or premade item to cover some items up. Test runs are key to making sure hour-long events work right and the library staff were lucky to be able to setup times in order to do so. A great rule of thumb, as with any large event, is plan for disaster. During our program, the puzzle box used had issues so it needed replaced, and a scarecrow prop lost its head. Items such as these are not easy to gather and multiple uses tend to wear items out. There were many lessons that we learned while hosting this event. With the knowledge the library staff have now, any future escape rooms will be improved. Thank you for making it such a success. Keep an eye out for new escape room adventures here at the library – a mystery is afoot in October!