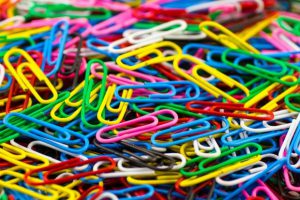 Whether using it to hold some important documents together, clipping a chain of them together in a fit of boredom, or bending it into a useful shape or hook, paperclips are one of the most iconic office supplies. A desk isn’t complete without a small tray of paperclips, and you can never have enough. Therefore, absurd as it is, it makes some sense that we have a whole day of honor for this tiny office helper. National Paperclip Day is observed May 29th in America, and its history goes back decades.

The first patent for a bent wire paperclip was created in 1867, given to Samuel B. Fay. It was created as a device to hold tickets or tags onto fabric as to not leave holes. The patent also noted it could be used to hold papers together, but that wasn’t its primary purpose. Fay received his patent on April 23, 1867, and he was the first of many to patent a paperclip prototype. Patents, however, do not prove who made something first. Fay’s patent bears little resemblance to the modern paperclip we use today.

The simple three-bend oval paperclip we know today was created by the Gem Manufacturing Company in Britain, and since there was no patent for it, historians have to guess when it was made. They suspect it was created in 1870, and it was introduced to the Americas around 1892. The name “Gem” was registered as a trademark for the clips, and even today paperclips are still sometimes referred to as “gem clips”.

Paperclips were even used as a symbol of rebellion, briefly during World War II. According to sources, Norwegians would often find symbols of rebellion to protest the Nazi regime, and as soon as one symbol was banned they would find another. At one point they used paperclips, carrying them on their person or wearing them to symbolize their unity, “sticking together”.

Paperclips have made fairly modern history, too. Back in 2005, a Canadian blogger named Kyle MacDonald managed to barter and trade over the course of a year to get a house, starting with a single red paperclip. He started on July 14, 2005, trading his red paperclip for a pen shaped like a fish. Almost exactly a year later, with 13 more trades under his belt, he ended up with a two-story house in Saskatchewan. 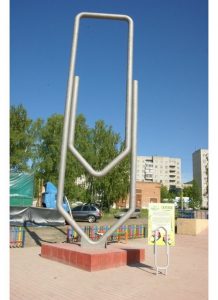 A memorial to this red paperclip was created in Kipling, Saskatchewan in 2007, and at the time of its construction it was the world’s largest paperclip, bringing even more attention and fame to MacDonald. Three years later, it was beaten for its record by Evgeny Stepovik in Miass, Russia, who created a massive stainless steel paperclip. Stepovik’s paperclip measures roughly 30ft high and 8ft across. At the time of writing this, there is no indication of a larger paperclip existing.

From a handy office tool to a bored kid’s toy, paperclips have all sorts of uses and capabilities. It’s no wonder they’re such a staple (pun not intended) of offices and desks everywhere. Hopefully knowing a little more about the history and applications of paperclips throughout recent history helps make sense of why we have a National Day for them.