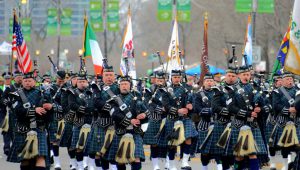 March, for as long as I’ve known it, has been linked with the Irish. We celebrate St. Patrick’s Day, we wear green to avoid getting pinched, and stores are stocked with all sorts of green-dyed foods and novelties. Aptly enough, in 1991, March was also declared Irish-American Heritage month by George Bush. Since then, every year the president declares the month and makes a brief statement about the day and the impact Irish immigrants had on our country. However, this statement can’t fully capture just how significant Irish immigrants were to America, and just how large of an immigration it was.

Roughly half of the first Irish immigrants were from the province of Ulster, while the other three Irish provinces (Leinster, Munster, and Connacht) made up the other half. You might be surprised to know that almost all of these early Irish immigrants didn’t exactly want to go: they were almost all men who were working in indentured servitude (which is now illegal, as it is a form of slavery). A little later, a mass of Irish prisoners-of-war were also sent to the colonies. Not much cultural impact came of this in early America. Seeing as most of the “immigrants” were men, they were unable to start families and maintain their culture, and if they lived long enough to complete their contracts, they died childless and alone. Any who did manage to survive a contact often left back for Ireland or somewhere else in Europe.

Many tales are told of poor Irish-Catholic immigrants moving to the colonies in the 1700’s, but this isn’t an entirely accurate depiction. Irish men and women of all classes made the voyage, including the rather well-to-do Charles Carroll in 1706, whose grandson signed the Declaration of Independence 70 years later. Many immigrants in this time period were, however, fleeing religious persecution. They began to come over as family units, which allowed the culture to take root a bit more, and they began to form some actual Irish communities in America.

This increase in immigration only increased from this point. Following the Louisiana Purchase in 1804, the next 30 years saw an influx of more than a million Irish immigrants. Living conditions began to get worse in Ireland, but the potato famine in 1845 was the nail in the coffin for many Irish families, sending them across the ocean towards the promise of the Americas. This massive influx meant that Irish-American immigrants had a massive presence in the building of America’s infrastructure over the next decades. Roads, railroads, bridges, canals and general construction teams were dominated by Irish-American immigrants. Police forces of the coming century were almost 20% Irish heritage, and a similar amount of schoolteachers were women of Irish descent.

Not only did they help get the country on its feet, but Irish culture made its own contributions to American culture with things such as folk music, the development of country and western music, and stock car racing, all which became ubiquitous into the 20th century.

By the numbers, Irish immigrants made up 1/3 of America’s immigrants between 1820-1860. Census figures in Ireland show that between the years of 1841-1891, Ireland’s population nearly halved, from 8.2 million down to 4.7 million, due to immigration. These daunting numbers just go to show just how many Irish-Americans there were in the early years of America. The stories of these men and women who helped found our country are near limitless; ancestors to many of us, and the work they did still can be seen to this day.