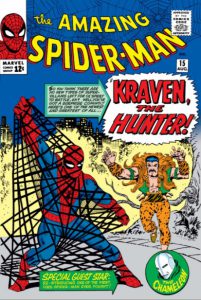 Spider-Man makes his entrance by crashing the meeting of a group planning a bank robbery.  As soon as the web head reaches the floor, one of the conspirators escapes in a puff of smoke and changes his outfit.  The mysterious disappearing co-conspirator is The Chameleon, and he now plots to dispose of Spider-Man.  The villain quickly concocts a plan to call in his friend, Kraven the Hunter, and ask him to go on the hunt for Spider-Man.  Peter catches wind of this plan after J. Jonah Jameson orders him to take photographs for The Daily Bugle of Kraven’s arrival at the dock.  Betty Brant and Flash Thompson are angry with Peter because Liz Allan is fliting with Peter.  Once off the boat, Kraven vows before the public that he will capture Spider-Man.

Kraven knows that to be best the webslinger he must study his fighting style, so he sets up a bank robbery that he knows Spider-Man will try to stop to obtain that information.  During the robbery trap, Kraven comes out of hiding and begins to tangle with the wall crawler.  Spider-Man quickly discovers that Kraven is quite a formidable foe in terms of strength, and that he uses drugs on his opponents that weaken them.  Realizing the situation is more deadly than he originally believed it to be, Spidey leaves the fight and plans his next move when he must confront Kraven again. Later that night, Peter gets the shakes and cannot shoot his webs straight or hold a test tube due to the drugs used against him.  However, he did place a Spider-Tracker on Kraven during the fight.  The tracker takes Spider-Man to Central Park.

The fight begins, and Kraven uses a net on Spider-Man.  The webslinger initially struggles with the net, but once he is free he sees two Kravens.  One of the Kravens applies magnetic shackles on Spidey.  He ducks out a while attempting to free himself of the shackles. Once the shackles magnetic hold is disabled, Spider-Man jumps one of the Kravens and unmasks him discovering that one of the Kravens is actually The Chameleon. Spider-Man now decides to turn the tables on Kraven and stalk him.  Eventually catching up with the hunter, the two combatants begin their fight.  However, Kraven flees the fight and Spidey traps the hunter with a giant sticky web.  Finally removing his shackles, the webslinger leaves Kraven to the authorities. Peter takes photographs of the arrest of the two villains. Later, the teen superhero watches as the two Russians are deported.  Both swear vengeance on Spider-Man.