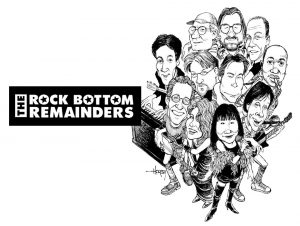 With Halloween just around the corner, and “IT: Chapter Two” out a little over a month ago, Stephen King is a name on a lot of people’s minds lately. He’s known for spooky tales and an extensive film adaptation collection, as well as a few TV show adaptations such as Under the Dome and Castle Rock. However, most people don’t know this fun fact about King- he’s in a band! He plays rhythm guitar and sings alongside a group of his friends in the Rock Bottom Remainders.

The Rock Bottom Remainders is a collection of authors and writers who formed an “American rock charity supergroup”, with featured members such as Amy Tan, Dave Barry, Matt Groening, Ridley Pearson, and of course, Stephen King. The name of the group is a joke on the term “remaindered book”, which is a book that is sold at a lower price when too many are made or not enough sell. This joke isn’t that self-deprecating, however; according to their website their members have published over 150 books, and sold 350 million copies.

The band was founded in 1992 by book publicist Kathi Kamen Goldmark. “In the fine rock & roll tradition, the Rock Bottom Remainders were conceived in a car,” states Kathi on the bands website. “As a semi-pro musician with a day job in book publicity, I spend a lot of time driving touring authors around San Francisco…I decided to form a band of authors!”

Their first gig was at the Anaheim American Booksellers Association convention in 1992, and since then they have performed various charity concerts and events, reaching a total $2 million raised for various charities. Their last solo concert was on June 23, 2012, in the same location as their first. The event was sponsored by ProQuest and helped raise money for various library and information science scholarships. Since then they have appeared on The Late Late Show with Craig Ferguson in August of 2012, and at the Tucson Festival of Books in March of 2015.

Although critics have referred to them as having “one of the world’s highest ratios of noise to talent”, their impact was never for a record deal or a platinum album. They instead performed as a group of friends, raising money for a good cause and having some fun connecting with fans in a way book signings and tours never quite reach.

Videos of their performances can be found on YouTube and most video sharing sites.

One thought on “Authors Who Sing: Rock Bottom Remainders”