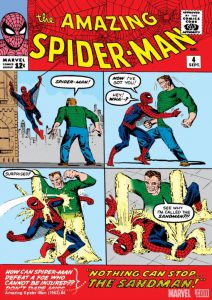 Synopsis of First Appearance: “Nothing Can Stop… the Sandman”

Spider-Man sees some thugs preparing to rob a jewelry store and webs them up before they can perpetrate their crime.  The thugs threaten to sue Spidey for assault and battery.  When the cops arrive the web slinger leaves the scene as the evidence makes him look guilty.  Spider-Man blames J. Jonah Jameson for the treatment he receives and leaves the editor of the Daily Bugle a token in his office.  Spider-Man then runs into Sandman on a rooftop.  Sandman bested the wall crawler, tearing up much of his mask.  This forces Spidey to flee quickly to protect his secret identity.  Back home in Queens, Peter busily is sewing his mask back into shape when he learns the origin of the Sandman via a news bulletin.  The Sandman is an escaped convict who ended up on a beach that was being used for radioactive testing.  Sandman was unlucky enough to be present when a test occurred, resulting in him now having gained power to act as if his body were made of sand.  Sandman was featured in the news bulletin because he had robbed a bank and ran from the police.

The next day Peter goes the Daily Bugle offices to talk to Jameson about acquiring an advance, but is instead thrown out and decides to head to school at Midtown High.  There Peter witnesses Flash Thompson asking Liz Allan about going on a date with Peter.  Peter had lost track of his upcoming date with Liz and gives her a rain check so he can battle the Sandman.  Miss Allan was less than pleased.

Realizing that he cannot run forever, Sandman determines he must find a place to hide.  As luck would have it for our Friendly Neighborhood Spider-Man (something that does not happen often for Peter and is known as “The Parker Luck”) Sandman chooses Midtown High.  Once inside, Sandman forces his way into a class room where the principal is giving a group of students a lecture.  Sandman orders that he be given a diploma and threatens to teach the principal a lesson if he does not receive one.  Peter is in the hallway and hears Sandman’s demand.

With all haste, Peter gets into his Spider-Man costume and bursts into the class room knocking the villain down.  The two come to blows until Spidey tricks Sandman into turning himself into sand.  The webslinger then vacuums him up with an industrial sized vacuum cleaner.  Realizing he neglected to take photos of the struggle for the Bugle, Spidey stages a scene with a bucket of sand.  When the police arrive the Spider-Man hands the vacuum bag to the police.  Peter gets back in his street clothes and runs into Jameson and gives him the photos of the battle.  Peter later runs into Liz, telling her he can make their date after all but she has already made new plans with Flash.  Having suffered enough of Flash’s insults, Peter threatens to wipe the smile off Midtown High’s best athlete.  Knowing his spider strength could seriously hurt Flash, Peter walks away.  With his fellow student seeing him as a chicken and agreeing with Jameson’s evaluation of Spider-Man, Peter has a  soul searching moment about his decision to become the Amazing Spider-Man.