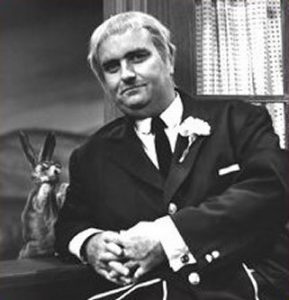 Once the television set entered American homes in the 1950s, a small group of dedicated TV pioneers devised regular programs that sought to educate and entertain preschoolers on weekdays after older siblings left for school. Most of you readers remember with fondness watching Electric Company, Sesame Street, or Mr. Rogers’ Neighborhood . The Bellevue University Library recently received information on Fred Rogers in two different formats, the DVD Won’t You Be my Neighbor? (DVD PN1992.4.R56 W66), and the audio book The Good Neighbor, (Audio Book PN1992.4.R644 K56). Both are available for checkout. My personal memories are from an earlier show, Captain Kangaroo. Since Bob Keeshan, who portrayed the Captain, was born on this date in 1927, the rest of this blog will emphasize Captain Kangaroo.

The show began on 3 October 1955. In the late 50s when I was a regular watcher, the show was filmed in black and white, and as soon as I heard the violins begin the theme song.  I would scamper to the TV. My Mom knew where I would be for the next 30 minutes.  I don’t remember ever hearing why he was called Captain Kangaroo, but it may have had something to do with the huge pockets in the jacket he wore. They did resemble kangaroo pouches.  In my memory, Captain had one human sidekick, Mr. Green Jeans, who was usually clad in overalls, a 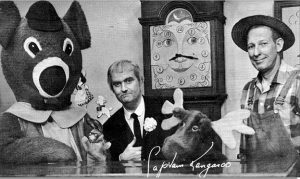 plaid shirt, and a straw hat. There were also two puppets, Mr. Moose and Bunny Rabbit, a mascot-looking silent character named Dancing Bear, and a smiling clock face that the Captain called Grandfather Clock. Mr. Moose was the rabble-rouser, usually saying something or doing something to make the Captain upset. My favorite part was when the Captain would read a story and the illustrations from the books were shown on the screen. This may have something to do with my willingness to lead story hours at the first job I had as a teen, at our local public library.

Bob Keeshan continued portraying Captain Kangaroo until the show was discontinued in 1993. I am grateful that this program introduced generations of children to gentle humor and human interaction, and that it lead the way for the children’s programming that followed.

One thought on “Homage to Captain Kangaroo”