The Library on the Go initiative was established during the summer of 2014 to enable Bellevue University staff and faculty members to check out library materials without visiting the library. One Friday a month, a library team takes 60 – 80 items and two iPads to the upper lobby of the ESB over the lunch hour. Staff and faculty members are invited to check out any of these items in that location. They are introduced to different genres (mysteries, fantasy, adventure, banned books, romances, etc.) in different formats (audio books, DVDs, books, kindles). New arrivals, best sellers, and award winners are offered each month.

During the summer of 2018, a Library on the Go committee was formed to reconsider and possibly update the procedures for LOTG. The committee decided to experiment with offering the monthly session at different locations and trying a different time. 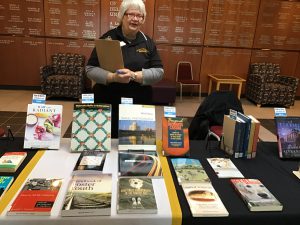 nt was held on Wednesday, February 27, in the front lobby of the Learning Center. Thinking that the LOTG team would catch some of the faculty and staff on their way home, and some students on the way to night classes, the committee set the time on February 27 at 4:30 – 6:00.  The weather cooperated, and the team was able to transfer the items from the library to the Learning Center on a hand cart with little difficulty. The lobby was spacious enough to set up the display, the lighting was good, and the requested tables were in place. Two new faculty members, one staff member, and one LOTG regular participated, as opposed to the 12 – 18 patrons that LOTG usually has in the upper lobby of the ESB. The team was told by one of the four patrons that most faculty members leave before 4:00 when their office hours are over. February 27 was the Wednesday of finals week, so the few students that did go past the tables were concentrating on getting to the tests, not selecting recreational reading or viewing material.  Lessons from the February experiment were to find out which weeknight has the most night classes scheduled in the Learning Center, and to have LOTG later to concentrate on the students taking night classes.

The second experiment was held on Friday, March 29, in the Student Center. Thinking that the LOTG team would have students, faculty, and staff come to browse before or after lunch, the committee set the time on March 29 at 11:00 – 12:30. The requested tables were in place. The team was able to transfer the library items on the hand cart on the way to LOTG, but were caught in rain going back. Two of the patrons who participated in the February 27 experiment checked out during the March one also. The Student Center had a few walk-throughs while the team was there, but no one else checked out. Lessons from the March experiment were that lunch is not served on Friday, and unless it is a sunny day the Learning Center is too dark. The skylight makes it difficult to see on cloudy days or after dusk.

The next meeting of the Library on the Go committee is on April 30, and we will be evaluating the results of the experiments to see if changes need to be made to the LOTG sessions. Readers of this blog are encouraged to comment on possible alternate times and locations to be considered, or to contact me directly at oconnor@bellevue.edu .  Let us know your opinions!