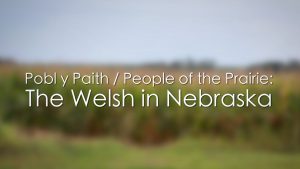 Robert Humphries, from the Great Plains Welsh Heritage Project, brings a documentary about the Welsh in Nebraska. Touching on the lives of immigrants in Wymore, Nebraska, it shows how they made lives for their families as well as the obstacles in their paths.

This twenty minute film involves interviews as well as quotes from items in the archives of the Great Plains Welsh Heritage Project. These quotes are spoken in not only the English language, but the Welsh language to immerse the viewer in the history of Welsh immigrants. Through the translation of Welsh with the use of subtitles, this video keeps the history of the Welsh alive. Historical images, landmarks of the Welsh as well as interviews with descendants of immigrants, help this story take viewers on a journey to the past. It highlights the hardships of being involved in the Civil War and other obstacles as the importance of Bethel Church in the lives of these families. It also highlights the heart aches of the loss of places like Bethel place for those that had memories immersed in the church.

This film acts as a bridge from the past to the present, as well as, highlights landmarks that the Great Plains Welsh Heritage Project preserves.     By utilizing the memories of those still living, this film helps viewers understand why the Welsh language is not widely spoken, as well as, the journey these families took to become Americans. Events such as Eisteddfod, a competition of poetry and music in the Welsh language, show how the Welsh kept their heritage alive in the past. The Great Plains Welsh Heritage Project has landmarks that it helps to preserve, such as the Historic Pleasant View School House, which the film touches on to help viewers know how the Welsh heritage is kept alive in the present day. While this is a short documentary, it is full of life and information, the use of the Welsh language emphasizing the importance of culture. This film and others like it can be found in the Bellevue University Library General Collection and may be borrowed for one week, with the option to renew once.