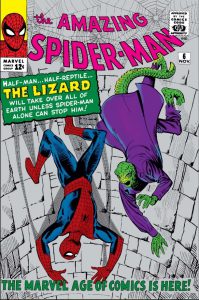 Synopsis of First Appearance: “Face-to-Face with… the Lizard!”

Reports begin flooding in of a humanoid lizard in Florida named by the press as “The Lizard.” J. Jonah Jameson, publisher of New York’s Daily Bugle, catches wind of the story, and he publically challenges Spider-Man to defeat the Lizard. Peter Parker (AKA Spider-Man and free-lance photographer for the Bugle) asks Jameson what his intentions are with the story.  Jonah reveals that it is a stunt to gin up sales of his newspaper.

Peter and some of his classmates take a field trip to Natural History Museum. Peter shows an interest in exhibits featuring lizards, especially after Jameson’s proposed duel with the Lizard. However, the situation changes drastically when one of his class mates, the attractive Liz Allan, is held hostage by thieves.  Peter ducks out and puts on his Spider-Man costume and comes to Liz’s rescue.  Later, Peter hears that the Lizard has struck again.  Back in his Spider-Man get up, Peter goes to Jameson’s office and accepts the challenge. Not long after that, Peter is on a flight heading to Florida with Jameson to supervise him.

Once the pair arrives in Florida, Peter makes an excuse that he is out of film and sneaks off to put his Spider-Man costume and hunt for clues. The lone clue he discovers concerns the reptile expert Curtis Connors. Racing to the Connors’ home the web slinger is greeted by Connors’ wife who informs him that her husband is the Lizard.  She informs Spider-Man that Curt was experimenting with growing back limbs, as he had lost a limb in a war.  He used himself as the guinea pig and took the serum he had created, but it transformed him into the Lizard.

The Lizard appears at the Connors’ home and attacks Spider-Man and Connors’ wife and son. Spider-Man defeats the Lizard and then uses Connors’ lab to concoct a new serum that will revert the Lizard back to his human form.  Spidey heads out into the swamp looking for the Lizard and finds him and an army of loyal reptiles inside a castle. Spidey steps up his camera to take photos as battles the Lizard in an attempt to get photos from their fight.  His chief goal is to get the antidote into the Lizard’s system. The web slinger succeeds in returning Connors to human form.  They both agree to keep secret the fact that Connors is the Lizard.

Removing his Spider-Man costume, Peter meets up with Jameson and hands him pictures he claims he got off a local. Jameson dismisses the photos as phony and tears them up, exclaiming that the cost of the trip will come out of Peter’s future payments.

Back in New York, Peter calls Liz in attempt to get a date with her. Liz hangs up on Peter because she is expecting a call for that “dreamy” Spider-Man.  To wrap up the adventure, Peter sends a mocking letter to Jameson at the Bugle.