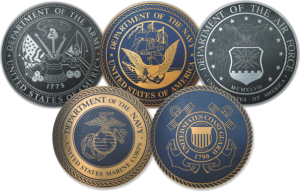 May is “National Military Appreciation Month,” dedicated to those who are currently serving and veterans of the United States Armed Forces.  Throughout the month there are celebrations to acknowledge the contributions of all those who served.  This event was introduced into legislation by Senator John McCain and Representative Duncan Hunter in 1999, and both Senate and House called upon the president to issue a proclamation for observance, which is renewed annually.  In 2015, a small group of volunteers banded together to preserve May as National Military Appreciation Month through the organization NMAM.  Their aim is to encourage educational institutions to incorporate crucial military events in their lesson plans that feature the history of each military branch.

On May 3rd, Bellevue University hosted an outdoor exhibit consisting of 31 towers featuring almost 5,000 photos of military and personal photos of America’s fallen service members since 9/11.  Coinciding with the exhibit, the University was designated as an official “Purple Heart University” by the Military Order of the Purple Heart (MOPH), a congressional chartered U.S. War Veterans organization.  Additionally, on Thursday, May 24th, the Freeman/Lozier Library will be screening part one of the PBS 10-part series “The Vietnam War” produced by Ken Burns and Lynn Novick, at 2:00 p.m.

There are 6 official national observances that recognize National Military Appreciation Month and they are:

To learn more about American military history and America’s warriors of freedom and/or how you can show appreciation and recognize our armed forces, check out these resources: