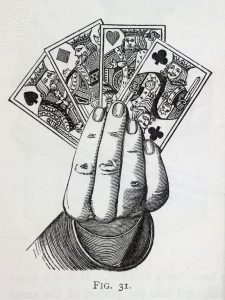 Today marks the tail end of Thanksgiving Week, and also of National Games and Puzzles Week. Working up the energy to do anything on the weekend after Thanksgiving can be difficult (those who are into shopping excepted), but one thing you might consider is playing tabletop games. Many families already have a tradition of playing games during Thanksgiving Week–for example, the older generations of my family plays the card games Up and Down the River (known by dozens of names, including Oh Hell, Contract Whist, Mormon Bridge, and Rats) and Hearts, whereas the younger generations, myself included, often play our own games, usually newer board games or card games we’ve discovered for ourselves.

One way to celebrate National Games and Puzzles Week is to learn some new games and try teaching them. I like to keep my repertoire of card games particularly well-stocked, as nearly every household seems to have at least one deck of cards somewhere, and I like knowing that with just that one deck of cards I can teach and play dozens of games and their variants. Of course, not every card game can be played with just a deck of cards and nothing else–sometimes additional decks, or poker chips, or dice, or props (like a silly hat or a cribbage board), or ‘non-standard’ decks might be required. Here are a few pretty simple games that truly only require one deck of cards (sometimes even less) that you might want to learn in order to try with your families and friends this Thanksgiving weekend, or in the future. All rules are linked to Pagat, a wonderful resource of card and tile game rules from around the world.

Having talked to friends about what their families play for Thanksgiving, I learn that every family has their own game or games that they play: Scrabble, Golf (the card game), Monopoly, Cribbage, Euchre, and Pitch are all popular among my friends’ families (amazingly with little to no overlap), and I suspect that if I continued to interview people I’d keep stumbling across new games.

Does your family have a family game or games that they play together on the holidays? Let us know in the comments, and point us toward some rules so that we can learn them too!