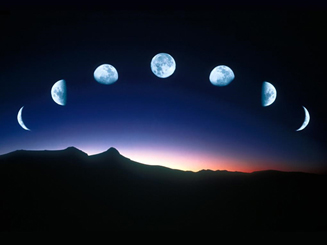 Like the sun and other elements of nature, the moon has been revered as magical. It’s symbolized many goddesses and followed many paths of lore. Werewolves change at the sight of it being full in the sky; a man lives in it, etc. One thing that has not changed is the memorizing effect it has on people no matter the time of month.

The list of goddesses expands over every culture, some having a goddess for different stages of the moon. Artemis, the best known Greek goddess is symbolized best by the crescent moon while Selene represents the full moon. Sefkhet was one of the Egyptian goddesses of the moon and time, the stars, and architecture. Rhiannon was a Celtic goddess who is in charge of the moon, death, night and fertility. Mama Quilla was the protectress of married women as well as the moon goddess to the Inkans. Ishtar was the Babylonian daughter of the moon. The Hindu goddess Jyotsna was in charge of the autumn moon and twilight. Mawu was the African goddess of the moon also symbolizing both wisdom and knowledge. There are so many goddesses for every culture that it doesn’t even begin to cover them all. It’s a fascinating thing to see so many deities for one culture.

My favorite goddess that I had come across was Selene, a goddess I’d never really heard of before. The reason for that seems to be that Hera often was her replacement in the stories about a shepherd prince. Selene fell in love with Prince Endymion and wanted to stay with him. He was granted immortality by Zeus, some myths say in the form of sleep, in order to be by her side. Her ability to stay with him was different compared to the usual stories of someone being infatuated. Of course, the gods and goddesses often depicted aspects of the human life with its emotions.

Just as there are goddesses to represent the ever changing seasons, there is an ever changing face to the moon. Perhaps it is due to this that so many deities represent it. It rests high in the sky, either bright enough to light our path or slicing its smile through the heavens. The moon pulls on our emotions with its beauty and calms us with its light. Or, it does that for me. Maybe to the ancients it was a soothing light and it was a guide in the darkness. Either way there’s just something about it that’s magical. We landed on it to see what existed outside our window for so long. We did it to see what possibilities could exist in the universe.

Take a look out at the moon tonight; enjoy the peaceful glow of the first night of the full moon. Enjoy it when it’s just a crescent. Miss it when it’s hiding away for its short rest. Enjoy it while you’re bustling through life. It is one of the constant companions we have.

Check out our library for books on the goddesses and the moon.

2 thoughts on “The Moon and Its Protectors”