This year marks the 70th anniversary of the end of World War II. To commemorate the end of that global tragedy, Bellevue University is sponsoring two events this spring. One event took place on Thursday, April 30 in the multi-purpose room on the Garden Level of the Administrative Services Building, and the second will be this.

The April event was an interview with Mrs. Fran Sewell, who served during World War II as a WAVE in Washington, D.C. Along with other women who were unmarried college graduates over the age of 21, she encoded and decoded teletype messages using a complex typewriter-like machine. Bellevue University professor Ron Woerner, one of the full-time faculty in the College of Science and Technology, understood the value that Mrs. Sewell’s service and memories would have for current cybersecurity students,and organized the event. Her remarks were enthusiastically received by her audience, who asked pertinent questions and lined up after her presentation to ask for her autograph or have a personal word. 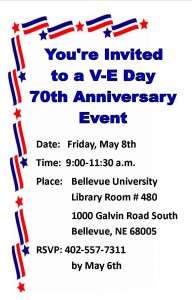 e May 8th event is a celebration to mark the 70th anniversary of Victory in Europe (V-E) Day. On May 8, 1945, in Rheims, Germany, General Alfred Jodl (Chief of Operations of the German High Command) signed the surrender document to end the hostilities in Europe. The Bellevue University Library and the Sarpy County Museum are co-sponsors of the event, which will take place from 9:00 – 11:30 that morning on campus. Ben Justman, Director of the Sarpy County Museum, will present a 30-minute power point on “World War II and Sarpy County”. A pictorial history of Offutt Air Base that he compiled was published in November, 2014, and he will be autographing copies for those who want to buy them later in the morning.

Before and after Ben’s presentation, portions of video-recorded interviews of two World War II veterans will be shown. The Signature Series classes of 2004-2005 could select being moderator for one of these interviews as part of their community service project for the class. Professor Del Stites was also the interviewer on many of the tapes. The Bellevue University Library has 36 of these interviews in our digital archives, and this event hopes to increase public interest in these treasures. Andrew and Mary Kolesik of A.M. Surplus on Fort Crook Road (www.amsurplus.com) have graciously offered to loan materials from their store to decorate the area.

Attendees will have the opportunity to have their photo taken during the event, and have it mailed or e-mailed to them later. Finger food and beverages will be provided. The only cost during the morning will be to those who choose to purchase Mr. Justman’s autographed book for $23.50. Survivors of World War II, as well as those interested in honoring those who served during that life-changing conflict, are welcome to attend. Please call 402-557-7311 and leave a message by noon on May 6 if you can join us, so that we will have sufficient food and beverages. Please come and celebrate with us!