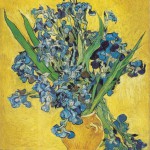 March 30th is the anniversary of Vincent van Gogh’s birthday. He was born in 1853 in the Netherlands and died in France on July 29, 1890. Vincent van Gogh is considered to be one of the greatest Dutch artists. He is known for his Post-Impressionist work, which had a lot of influence in 20th century art.

Although he is most well-known for his landscapes, van Gogh personally considered his 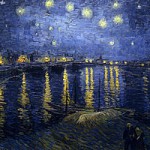 portraits to be his most important and worthwhile pieces. His artwork tended to feature a large amount of beautifully depicted nature in it. In addition to his landscapes and portraits van Gogh created many self-portraits and still life works. Some of which were parts of series, such as: the Cypresses (his most widely known series), Flowers, and Wheat Fields. There is a fairly distinctive, personal style to van Gogh’s work—which he crafted over time using inspiration from several styles, including Impressionist and Japanese art. During his lifetime, van Gogh’s work was not particularly well-known or widespread, as most of his popularity came after he died.

His work with art started at age 15 when he left school to work with art at his uncle’s art dealing firm. For several years he would travel around Europe, spending time in London, the Netherlands, Belgium, and France, as he spent time both attempting a career as a minister and studying art. Once he settled in France, van Gogh spent his time honing his art through constant work and studying with other painters. It was during this period of time that he ended up making some of his to-be greatest pieces—even as he struggled with both his finances and mental illness. Vincent van Gogh’s career only truly lasted about seven years, most of his work being done from 1883 until his death in 1890.

Starry Night Over the Rhone

Vase With Irises Against a Yellow Background