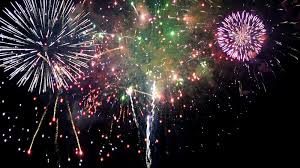 July is one of the few times a year we’re reminded of just how widespread fireworks are. In late June, tents and inflatable signs begin popping up in parking lots across the United States. The occasional bottle rocket can be heard going off at night. A friend, a coworker, or even a family member tells you about their planned trip to a massive firework stand in another state. With how restricted fireworks are to specific times of celebration, it’s easy to not realize how much of a phenomenon they are in our modern world, and how they reached this status.

Now it should come as no surprise to most, but fireworks originated in China. The earliest precursors to fireworks came about in the Han dynasty, starting in around 200BC. Fireworks and pyrotechnics were used in cultural celebrations to cleanse spirits, which was supposed to increase luck and happiness. The loud sounds would scare the spirits out, in theory, and the original noisemakers were cuts of bamboo cast onto fire. The water content and the hollow stems of bamboo would cause them to loudly pop when exposed to the heat of the flames. As gunpowder became more commonplace, the use of bamboo noisemakers became less practical, and the first “fireworks” took their place, most closely resembling modern day firecrackers.

In the later Song dynasty, roughly 1000-1200AD, fireworks were incredibly commonplace in Chinese markets, and firework displays evolved closer to modern ones, especially in regards to the colors. Colors in fireworks come from different metal powders and minerals burning with different chemical reactions. Early fireworks produced mostly white and yellow lights, but as the techniques became more advanced, they soon had a full spectrum of colors and shades. These techniques were fairly well-protected, and there are many writings as late as 17-1800 of travelers discussing how the vibrant and diverse colors achieved what they considered “the greatest secret of Chinese fireworks.”

Despite their best efforts to protect these secrets, however, no secret lasts forever. Fireworks inevitably spread across the Eurasian continent, and from there traveled across the Atlantic with the colonizers who would begin the United States. The use of fireworks to celebrate a level of independence started even before America was officially founded in 1776, and so the usage of them to celebrate the Fourth of July developed fairly naturally. Since Independence Day is exclusive to everywhere but the continental U.S., though, the global use of fireworks goes way beyond that one holiday.

New Year’s Eve is a pretty common global celebration, especially as far as fireworks are concerned. France sets off fireworks to commemorate the storming of the Bastille, India uses them to celebrate Diwali, and Malta uses them to signify major events, like birth of a prince or appointment of a new pope. Japan still holds the most uses of fireworks though, and in the summer, there’s a firework show somewhere in the country almost every night.

With how much technology and culture have spread, the future of fireworks and light shows have so much room for progress. These days, we have shells that explode in multiple shapes, have multiple stages of explosion, and change color as they burst. As far as pyrotechnics go, in use for celebrations across the world, I guess you can say that the sky’s the limit.