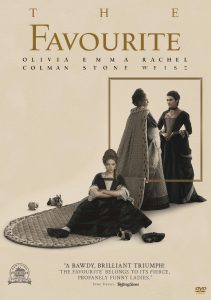 Do you crave a good historical drama? Are you partial toward dazzling cinematography and absurdist comedy? Then Yorgos Lanthimos’ The Favourite is the film for you!

Released in 2018, The Favourite possess bold performances from its three leading ladies – Olivia Colman, Rachel Weisz, and Emma Stone – as they regal a tale of political intrigue and betrayal, cunning schemes and illicit affairs. The backdrop of 18th Century England is an uproarious one, and Queen Anne dominates the English Court. As the last of the Stuart Monarchs, a line that ruled over then Scotland, England, Ireland, and area that would later become Great Britain, Queen Anne had to finagle homegrown socio-political disputes (i.e. Tories and Whigs) as well as foreign wars. In addition, she dealt with chronic ailments that riddled both her mental and physical faculties. She finds solace in Lady Sarah Churchill, her advisor, confidant and – sometimes – lover. The relationship between the two acts as a catapult for Lady Sarah’s growing influence on the court, where she enjoys a comfortable life sitting at the top of the dog pile. However, things change once Lady Sarah’s cousin, Abigail, arrives at the palace seeking shelter and work. Abigail was genteel by birth, whose standing is further impoverish through the reckless actions of her father. Her unbridled ambitions draws all three women into a perverse power struggle of greed and debauchery. A triangle that not only can affect their relationships with one another, but also influence the country as a whole.

The Favourite has been lauded for its spectacular performances. Receiving numerous awards and nominations, the film swept through the Academy, earning merits including Academy Award nominations, seven BAFTA Awards (including Best British Film and Best Actress in a Supporting Role), ten British Independent Film Awards, and eight European Film Awards. For her role as Queen Anne, Olivia Colman won Best Actress at the Academy Awards, the Golden Globes, and the BAFTAs.