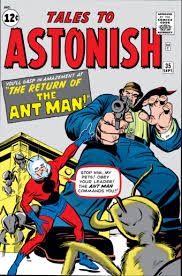 Partnerships: Janet van Dyne, aka the Wasp and his wife.

Synopsis of First Appearance: “Return of the Ant-Man”

Hank Pym is reintroduced to the reader, explaining that he has created two amazing serums.  The first serum reduces the size of things and the other restores them to original size.  Pym’s adventure in Tales to Astonish #28 is retold, explaining how the shrinking serum reduced him to the size of an insect and how he was forced to escape an anthill.  Pym managed to get a hold of the second serum and return to his natural size but decided to destroy both serums, as they were too dangerous for humankind.  Some weeks later Pym changed his mind, deciding that the discovery should not go to waste.  Stopping the serums from falling into the wrong hands, he had them locked away in his personal safe.

Pym eventually grew fond of ants after his adventure in the anthill and began studying them intensely in secret.  He found that ants communicate electronically via their antennae.  After many months of arduous engineering, Pym created a helmet that could communicate with ants by finding their distinctive wavelength. To accompany his new headpiece, Pym designed a costume that could protect him if he happened to be stung or bit by one of his new arachnid friends.

The same day that Pym completed his new costume and helmet, the United States government assigns him a top-secret project: create a gas that makes humans immune to radiation!  Pym receives four research assistants and begin the experiment in in earnest.  Weeks later the formula is almost complete when the communists get word of the experiment and send agents to pilfer it.

The communist agents raid Pym’s laboratory looking from the formula and hold Pym and his assistants at gun point. Pym is ordered to reveal the formula to the agents but refuses.  The agents decide to search the lab themselves.  Pym realizes that only way to stop the communists from getting the anti radiation gas, is for him to take the shrinking serum once again.  Donning his helmet and costume, Pym shrinks once again to insect size, becoming Ant-Man

Ant- Man returns the anthill that his previous adventure occurred in, discovering that his helmet definitely works and that he can command the nearby ants.  A large worker ant attacks Pym and he discovers that he still possess the strength of full grown human male and defeats the ant.  Pym adjusts his helmet and can now control all the ants in the hill and creates a small make do army of ants.

As Pym leaves the anthill the colors of his Ant-Man costume attract a large beetle.  Quickly, Ant-Man digs a deep hole and uses himself as bait for the beetle.  As the beetle heads for the center of hole, Ant-Man quickly fills it in trapping the insect.   Leading his ant army, Ant-Man mounts the largest worker ant and orders them up a wall that leads to a window in his lab.

Once inside, Ant-Man and his ant army watch the communist agents.  Alone, Pym unties his assistants and orders his ant army to attack the agents.  While dealing with the ant army the agents do not have time to notice that their prisoners have been freed and are about to incapacitate them.

With communist agents defeated, Ant-Man gets the enlarging serum and returns to normal size and rejoins his lab assistants.  Pym wonders if there will be another time when he will once more have to don his Ant-Man costume?