Archives act as window into the past, documenting the long historical legacies of the times before them. They enable us, as society, to regard the past with curious eyes, maintaining a partial an objective judgement for the purposes of conducting a forum conducive to education and research.

“The Dr. John P. De Cecco Archives & Special Collections of the GLBT Historical Society are among the largest and most extensive holdings in the world of materials pertaining to LGBTQ people, occupying more than 3,500 linear feet of storage. Broadly speaking, our over 900 collections include personal papers, organizational records, periodicals, oral histories, photographs, audiovisual recordings, ephemera, artifacts and works of art.”

AIDS Legal Referral Panel (ALRP) Records, Collection #2000-46. ALRP is an organization founded in 1983 that connects people with AIDS and volunteer lawyers. The collection also includes materials from the Women’s AIDS Network. The collection is hosted on Calisphere.

Art and Artifacts Collection. The GLBT Historical Society collection of LGBTQ art and artifacts encompasses a diverse range of two-dimensional and three-dimensional objects, including banners and signs, pins and buttons, sculptures, framed works of art, historic business signs, theatrical props, textiles, and paper materials such as drawings and sketches. A curated selection of the over 600 items in the collection is available online.

Linda Alband Collection of Randy Shilts Materials, Collection #2003-09. Randy Shilts (1951–1994) was a prominent, openly gay journalist and author. As a freelance reporter in the San Francisco Bay Area, Shilts covered issues facing LGBTQ communities, most notably the AIDS epidemic in the 1980s. Linda Alband was Shilts’ longtime friend and his business manager for the last five and a half years of his life. The collection is hosted on Calisphere.

Bay Area Reporter Archive: Founded in 1971, the Bay Area Reporter (BAR) is the oldest continuously published LGBT weekly newspaper in the United States. The paper’s entire run from 1971 to 2005 is viewable and fully searchable via the partners of the GLBT Historical Society’s BAR digitization project, the Internet Archive and the California Digital Newspaper Collection. The BAR digitization project was made possible by generous grants from the Bob Ross Foundation.

Bay Area Reporter Obituary Database: In cooperation with the Bay Area Reporter, this searchable database contains all obituaries that have appeared in the BAR since it began publishing them in 1972.

BML Videos, Collection #2014-10. Video recordings created by BML Videos of LGBTQ social and recreational events in the Bay Area spanning from the 1980s–1990s, including drag shows, award shows, leather events and others. The collection is hosted on Calisphere via the California Revealed program.

Bruce Decker Papers, Collection #2008-23. Bruce B. Decker (1950–1995), a Republican political consultant and public policy advocate, dedicated himself to AIDS research and education after learning that he was HIV-positive in 1984. Decker helped found Concerned Americans for Individual Rights, a national organization of moderate and conservative gays and lesbians. The collection is hosted on Calisphere.

Fruit Punch Radio Series. Keyword search and listen to selections from this radio show, with programs from the 1970s to 1980s. Fruit Punch was a groundbreaking gay radio program that debuted on KPFA FM Berkeley in 1973. The show covered a wide range of subjects, both political and cultural. Kevin Burke, the donor of the recordings, was a radio producer and member of the Fruit Punch collective. Selections from Fruit Punch are also available on Calisphere and the Internet Archive.

The Gay Life Radio Series. Keyword search and listen to selections from this radio show hosted by Randy Alfred, dated 1977-1984. The show covered a wide range of subjects, both political and cultural. Alfred is a freelance journalist and radio talk show host in the San Francisco area. Selections from The Gay Life are also available on DIVA.

Oral History Recordings. Selected oral history recordings have been made available online. The collection is hosted on Calisphere via the California Revealed program.

Oral History Transcripts. Selected oral history transcripts have been made available online. Keyword search our oral histories in the catalog and click on transcript links when available.

Harold T. O’Neal Collection. Collection #2002-03. Harold (Hal) O’Neal was a gay filmmaker who started filming in Southern California in 1939 and continued through the 1980s in various locations. His films contain material about a wide variety of subjects on gay and general interest themes. Included here is footage of various Pride parades in San Francisco. The collection is housed on DIVA.

Robert Pruzan Papers, Collection #1998-36. Robert Pruzan (1946–1992) was a photographer who documented LGBTQ life in San Francisco in the 1970s and 1980s. The digital collection includes images related to LGBTQ cultural sites, events, and people. Some major subjects include Arena Bare Chest Contests, the Gay Games, Harvey Milk’s birthday celebrations, and Lesbian and Gay Freedom Day and Pride. The collection is hosted on DIVA.

Sue Rochman Papers, Collection #2005-13. Sue Rochman is a freelance health journalist from the San Francisco Bay Area specializing in oncology and HIV. The collection includes her research and notes on HIV/AIDS and prison populations. Materials include correspondence from prisoners and prison activists, published articles, reports, and handwritten notes from interviews, conversations, and readings, circa 1988 and 1991. The collection is hosted on Calisphere.

Material from selected collections has been digitized in partnership with Gale/Cengage. Access is available in the reading room of the GLBT Historical Society or with a subscription (often available through universities or public libraries).

Archives of Sexuality & Gender: LGBT History and Culture Since 1940, Part I

Lou Sullivan Papers, Collection #1991-07. Lou Sullivan (1951–1991), was a gay, transgender man who was an activist, historian and diarist. The digital collection includes letters between Sullivan and various medical professionals, colleagues, and friends, dated circa 1973 to 1991. It also includes video of Sullivan being interviewed by Dr. Ira Pauly, as well as speaking on a panel about gender-nonconforming people and AIDS. The collection is hosted on the Digital Transgender Archive.

Beowulf Thorne Papers, Collection #2003-10. Beowulf Thorne (Jack Henry Foster) was a political activist on issues affecting PWAs (People with AIDS). He was one of the founders of the magazine Diseased Pariah News (DPN). The digital collection documents the operations, both commercial and artistic of DPN, as well as the work of Oakland’s Condom Resource Center. The collection is hosted on Calisphere.

Transgender Ephemera. This is a selection of historical ephemera related to transgender events and organizations. The material is hosted on the Digital Transgender Archive.

Vanguard Magazine. This collection includes ten zines created and published by Vanguard from 1966–1967 and a retrospective zine created in 2011. Contributors to Vanguard were LGBTQ youth from the streets of the Tenderloin district in San Francisco. These zines contain poems, art, and articles that reflect the issues faced by poor LGBTQ youth at the time. The collection is hosted on the Digital Transgender Archive.

Chana Wilson Audio Recordings, Collection #2003-07. Chana Wilson is an author and former radio host who was involved with three radio shows in the 1970s and 1980s: “Lesbian Air,” “Radio Free Lesbian,” and “A World Wind.” Recordings primarily capture interviews, live music, and readings by women. The collection is hosted on the Internet Archive. 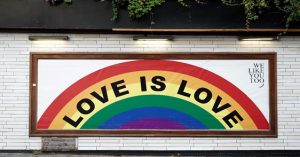 Photos by christian buehner on Unsplash