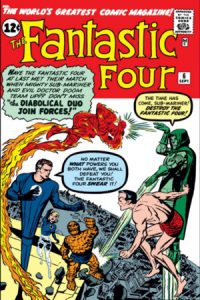 Synopsis of “Captives of the Deadly Duo!”

Johnny Storm, aka the Human Torch, is searching New York City for any trace of Doctor Doom.  His sister Susan Storm, aka The Invisible Girl, is also among the masses and invisible.  Sue changes back to her visible form, but the crowd makes her nervous and she heads back to the Fantastic Four’s headquarters on the top five floors of the Baxter Building.  She meets a man looking to unload a telegraph but instead uses the team’s special elevator to their headquarters to see if Johnny has returned from his search.  The reader sees a diagram of the Fantastic Four’s headquarters.

Upon reaching the entry room, Sue learns that Johnny was unsuccessful in his search.  On the other hand, the team did receive fan mail.  Reed Richards, aka Mister Fantastic, is reading the mail and discovers the that child in a nearby hospital was one the writers.  He uses his stretching powers to visit their laid up fan.  Ben Grimm, aka The Thing, receives a letter which Johnny reads aloud. The letter tells Ben to meet a group a punks called the Yancey Street Gang at the corner of Ashby and Main Street where they are going beat him up and make him like it.  Ben states, “… The Yancey Street Gang!  I’ve heard of these mealy-mouthed braggarts before! They get their kicks out of trying to rile me!”  Ben takes a six-inch-thick piece of titanium steel and wraps it into a cylinder.  He tells Sue and Johnny, “Send this to them!  And on the day they manage to unroll it, I will personally congratulate them!”  Ben then states that he wished he could tangle with some real enemies like Doctor Doom and the Submariner.

Meanwhile, Dr. Doom is using his aerosub to locate Prince Namor the Submariner.  Doom locates the Prince of Atlantis and offers a partnership to him so they can defeat the Fantastic Four and take over the world.  The Submariner leads Doom on a trek under the sea to the Prince’s new abode: a domed undersea villa with fresh sea vegetables.  Doom realizes that Submariner has given up his revenge for the surface dwellers because of his love for Sue.  Doom appeals to Namor’s anger and the Prince of Atlantis agrees to be part of this diabolic duo, but Sue must not be hurt.  Doom then reveals his newest invention to Namor, the magnetic grabber, which can pull anything no matter its weight.  The Submariner then heads to surface to enact their plan.

Johnny walks into a room at the FF’s headquarters thinking he saw photograph.  Sure enough, he finds a photo of Namor.  Sue gets angry and tells him to give the photo to her.  They get into a fight and Reed and Ben come in to see what is happening.  Upon hearing about the photo, the Thing declares, “Bah, I knew it!  All a gal wants is a good looking guy! It doesn’t matter if he is the biggest creep on Earth!”  Reed tells Sue she needs to give the group an apology.  She admits she does not understand her attraction to Namor when out of nowhere the mutant in question flies into the room!

As Reed, Johnny, and Ben attempt to attack the Submariner, Sue rushes to his side.  The team learns he is ready for all their powers and attacks which alerts Reed that in some way Namor is stalling the team.  Reed and Johnny rush the monitor screens but find no disturbances.  Seconds later the Fantastic Four’s headquarters, the Baxter Building, begins moving straight into the air and on to space!

The Building has been propelled up by Dr. Doom using the magnetic grabber.  The team and Namor grab oxygen helmets.  In orbit, Johnny’s flame goes out with no oxygen.  Reed grabs Doom’s ship that is pulling them towards the sun.  Knowing this would happen Doom sends out a defensive rocket that burns Mr. Fantastic’s hands.  Johnny and Reed are safe, but Namor realizes that he has been double crossed by Doom and joins forces with World Greatest Super Hero Team to stop Latverian monarch.  Understanding that space is similar to the earth’s oceans, Namor jumps off the Baxter Building and swims towards Doom’s vessel.

Namor breaks through Doom’s ship and mimics the powers of an electric eel to send an electric charger through the ship.  The Submariner throws Dr. Doom out of his ship.  Doom latches onto an asteroid and travels further in the solar system. Namor takes control of the ship and reverses it’s course.  The Baxter Building falls back to its foundation and Namor crashes Doom’s ship in the Atlantic Ocean and swims off.  For now, he will dedicate himself to the sea and his lost people.  Don’t worry True Believers, both Doctor Doom and Namor, the Submariners will return to the pages of the World’s Greatest Comics Magazine very shortly.