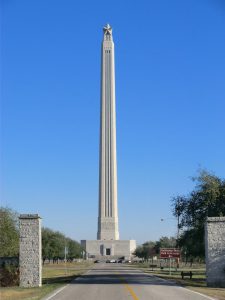 Southeast of the sprawling city of Houston, “The Monument” stands. This obelisk is visible for miles on the flatland between Houston and the Gulf of Mexico, and is now surrounded by oil derricks and electric power towers. It was erected during the Great Depression to mark the centennial of the turning point in the history of Texas. A summary of the early years of the area is carved on all four sides of the pedestal, and an elevator is available to take those interested to the top to get a better view. But a monument to what?

It is a monument to the events before, during, and after the Battle of San Jacinto, and the men who fought it. 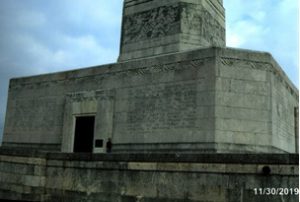 March of 1836 was an unsettling time for the settlers in the northern section of Mexico, or Texicans. On the 2nd of the month, a group of rebels declared their independence from Mexico by signing a written document at Washington on the Brazos. Concurrently with this brave act, later that week the defenders of the Alamo were defeated and eliminated on March 6. On the 19th, another small group of rebels under James Fannin was surrounded and surrendered to the Mexican Army near Goliad. After less than a week as prisoners, Fannin and his men were shot on the order of Santa Anna. The varied crew of Texican soldiers, volunteers, and refugees serving with Sam Houston in southeast Texas learned of the Alamo and Goliad atrocities and their rage smoldered.

Houston was more cautious than his subordinates wanted. The group of individuals that he was leading were “loaded for bear” and wanted to quit retreating and attack these blackguards who gave no quarter at the Alamo and killed unarmed prisoners at Goliad.  Houston sought to join forces with the U.S. Army stationed in Louisiana, but knew that the U.S. Army wouldn’t get involved with the Mexican Army unless the hostilities were very near the border and U.S. citizens were in danger. 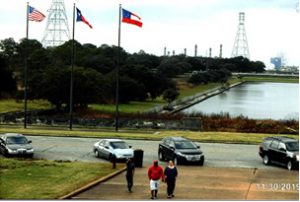 Circumstances came together in the Texicans’ favor on April 20. Santa Anna had split his force earlier that month – some remained pursuing Houston’s group, and he sent others to punish the signers of the independence declaration at Washington on the Brazos. For the first time, the Texicans had numerical superiority. The terrain was in their favor, with an open area surrounded on three sides by water and swamps. The Mexican leaders anticipated that the Texicans would attack at first light, and the night of April 20-21 most of the Mexican Army stayed up overnight building barricades, standing guard, and listening for the arrival of reinforcements. The reinforcements did arrive after a forced night march by 9:00 the morning of the 21st, but nothing came from the rebel camp until late afternoon. The Mexican cavalry was watering their horses and the infantry was catching up on their rest when Houston’s army appeared. The Texicans completely surprised their foes, and in less than 20 minutes the combat was finished. Houston’s group killed over 600 Mexican soldiers in the aftermath, and took more than that number prisoner.

As a result of the victory at San Jacinto and the capture of Santa Anna, Texas became a Republic until 1845, when it became the 28th state in the United States.