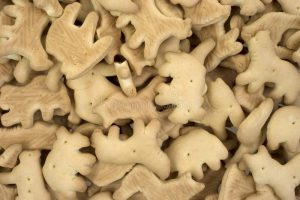 Yes, you read that right, National Animal Crackers Day. A favorite snack of children all across America, and featured in a classic Shirley Temple song, it’s no surprise that these small whimsical crackers have their own day of recognition. What might surprise you, however, is that something as simple as these crackers have a dynamic past stretching back to the 1800’s

Animal crackers, as we know them now, started as a biscuit sold in England and imported to the United States. They were an immediate success, and the demand for them increased so much that U.S. companies began to make the crackers themselves. Some early adopters of this manufacturing were Dozier-Weyl Cracker Company of St. Louis, Missouri, Holmes and Coutts Company of New York City, and Stauffer’s Biscuit Company of York, Pennsylvania, who produced their first batch in 1871. These companies later came together to form the National Biscuit Company, who later shortened their name to Nabisco. 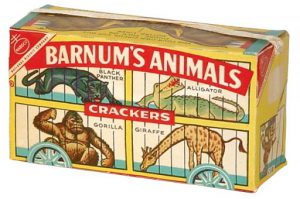 National Biscuit Company began to officially sell animal crackers in 1902, under the name of “Barnum’s Animals”. They designed a box that evoked the Barnum & Bailey Circus, with a red field and animals in cages, in circus carts that were common at the time. They also attached a string to the box, so that they could be placed on Christmas trees, which made them an even greater hit. The boxes were sold at 5 cents a pop, and came in small cartons, which were much more affordable and convenient than the standard of the time, which was bulk purchases of “cracker barrels”.

It wasn’t until 1948 that the product was renamed to it’s current one “Barnum’s Animals Crackers”. They also added rotary dies to their manufacturing process, which sped up the process and also allowed them to add little details to each of the crackers, making the animals represented easier to distinguish. The change in production wasn’t the only redesign they faced, however.

The early boxes featured animals in cages. The colors featured on the boxes didn’t change 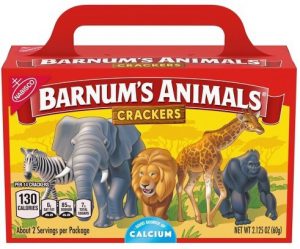 much, neutral animals on red, yellow, and blue backgrounds, but how the animals were featured changed quite a bit. As circuses became less common and animal rights became more of a hot button issue in later years, however, the bars were removed from the cages, and then the cages were removed altogether. As of August 2018, Nabisco created a new design for the animal cracker boxes in collaboration with PETA. These new boxes feature a zebra, lion, elephant, giraffe, and gorilla roaming free in a Serengeti landscape.

Nabisco isn’t the only manufacturer of animal crackers, and the varieties have only increased since they arrived in America. Since 1903, Barnum’s Animals Crackers have featured 53 different animals, with a current lineup of bear, bison, camel, cougar, elephant, giraffe, gorilla, hippo, hyena, kangaroo, lion, monkey, rhino, seal, sheep, tiger, and zebra. In 2002, they had a contest and added koalas to that list. The only four animals that survived every iteration of Barnum’s crackers were bears, lions, tigers, and elephants.

It’s incredible that something as simple as animal-shaped crackers managed to cross the ocean, become a massive success, and become a cultural staple like it is today. National Animal Cracker Day is observed April 18, so consider getting yourself a box to celebrate its journey into our homes.