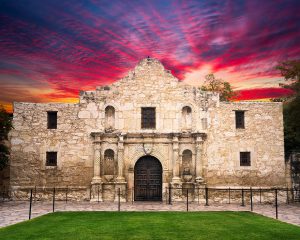 There are many legendary Texans. For those of us who were not born in Texas and have never lived there, it may be hard to accept some of the yarns that circulate. One fact that has many legends surrounding it is that in the winter of 1836, less than 200 individuals gathered in the ruins of a former Franciscan mission to protest they had a right to decide how they were governed and were besieged by at least five times their number. They held their ground from 23 February until 6 March, when the Mexican Army breached the inner courtyard. The morning of March 6, the final assault was made after the Deguello, a Spanish bugle call that meant no quarter would be given was blown. How did this come about? What did the sacrifice that the 180+ men made mean?

Up until 1821, Mexico was a province of Spain. In that year, the Mexicans won their 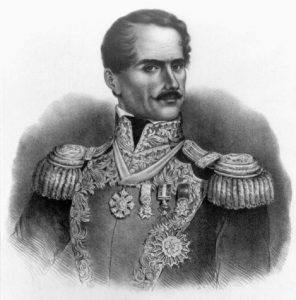 independence and one of the soldiers in that Mexican army was Antonio Lopez de Santa Anna. The northern section of the new country of Mexico needed settlers, and word went out to the American frontier that farmers and ranchers willing to become Mexican citizens would be welcomed by the fledgling Mexican government. Stephen Austin lived in Missouri at the time, and initially  brought 300 families to settle. By 1831, he had brought more than 5,000 former Americans into what is now Texas. But trouble was brewing between the new settlers and the Mexican government. In 1833 Austin journeyed to Mexico City with a petition from the former Americans that they be able to create a separate state government, loyal to their benefactors but able to make some legal decisions on their own. He was imprisoned in Mexico City.

Relationships between the two groups deteriorated when Santa Anna was president of Mexico 1833-1835, and by the end of 1835 violence was rife. William Barret Travis was a native of South Carolina who lived on one of Austin’s land grants, and by January of 1836 he was a LTC in the Texas militia. He came to San Antonio that month with 30 men reinforce the Texans who had captured the former mission from the Mexicans late in 1835. James Bowie, Kentuckian 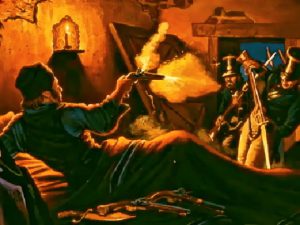 who had lived in Louisiana most of his life, was already in the Alamo in charge of the volunteers. The two formed an uneasy co-leadership of the defenders. Davy Crockett was a Tennessean who served in the Tennessee legislature and as a U.S. Congressman in the 1820s. Though Crockett fought with Andrew Jackson in the War of 1812, by the 1830s there was a fierce political rivalry between them. Davy heard about the building tension in Texas and set out with a group of loyal supporters to help. Santa Anna by now was on the march to quell the rebellion and get the Texans back in line. Sam Houston was commander-in-chief of the Texas army in the winter of 1836, and when he discovered the strength of the Mexican force he encouraged Travis and Bowie to fall back, join his group in Gonzalez, and wait until more men arrived in a central area. The decision was made to make a stand at the Alamo. 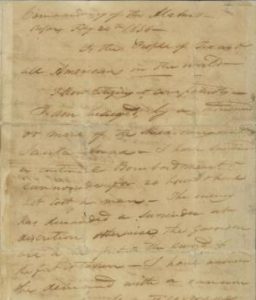 The Mexican army arrived at San Antonio on February 23, 1836, and the siege began not long after the Tennessee contingent arrived. This group of militia, volunteers, refugees, and Texas Rangers held on until March 6, when the ammunition ran out. All of the combatants were killed, but 16 women and children were spared to make their way to Sam Houston’s forces and tell the tale. 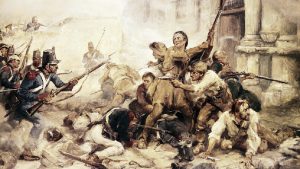 What did the sacrifice of the defenders accomplish? It bought Houston time to strategize. It brought more Texans to his ranks with the urge for revenge burning in their souls. It enabled Texas to become a republic from 1836-1845, then be annexed into the U.S. as the 28th state. It gave the American people a slogan that has come down the centuries and is used when a rallying cry is needed to personify the feisty spirit of the American people when they are backed into a corner: “Remember the Alamo!”