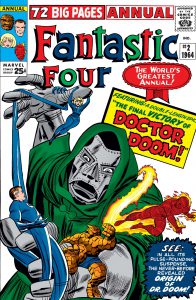 The Origin of Doctor Doom

The story begins with Doctor Doom meeting Boris on the eve of his mother’s death.  Doom steps out on to a field where his life started, and begins to thinking about his past.

When he was but a young lad, Victor Von Doom father’s was a gypsy healer.  One-day King Vladimir Fortunov’s men came to the gypsy healer, Werner Von Doom, in order to save the King’s ill wife.  Werner did his best, but the King’s wife succumbed to her ailments.  The King sent his men to apprehend Werner, but he and his son hid in the mountains. Werner put his coat on this son and they waited through the ice and snow.  Before Werner succumbed to the cold and ice, he asked Boris to look after his son. Boris took him to mean look out for his son not take him in as his own.  Enraged that the King had killed his father and mother, Victor digs up a chest belonging to this mother that is filled with mystical potions and tomes.

As the years progressed, Doom became a master of both magic and science.  He used his abilities to protect the common people of Latveria, while striking back at the nobility.  He avoided execution by creating identical robots that look just like him to fall into the King’s grasp.  Doom’s technology and scientific proficiency caught the attention of Western Hemisphere when State University from New York offered him a full scholarship.  Victor accepts the offer and almost ends up sharing a room with Reed Richards, but his arrogance and extreme demand for a private room puts the kibosh on the situation.  Reed instead chose to room with Benjamin Grimm. Victor was obsessed with creating a machine that could contact the netherworld*.  Reed sneaks in Victor’s room unannounced, and looks at the notes for the device Doom is resting his hopes upon.  Victor comes into his room noticing Reed and tells him angrily to leave without even looking at the notes Reed left behind about the issues with his calculations for the device.

With his device now complete, Victor orders an assistant to turn on the device.  Doom’s arrogance towards Richards would the great hubris of his lifetime.  Reed’s calculations were right, and the device explodes in his face.  His face now bandaged, the administration expels Victor with disgrace for this illegal experiment.  Returning to the Old World, Victor makes his way to the mountains of Tibet.  In Tibet, Victor finds an order of monks that agree to teach him magic.  Later he asks them to build a suit of armor for him.  Before the iron mask has cooled, he places it on his head, almost as if at this moment that Doctor Doom was born.  Doom leaves the monks and returns to Latveria, beginning a campaign that will see him become the absolute sovereign of his home country.

Return to the present in his mind, Doom walks back to his castle.  Boris is struck with the knowledge that soon Doom will find a new way to menace the human race again.

*Doctor Doom’s mother, Cynthia Von Doom, had given her soul to Mephisto (Marvel’s version of Stan) to gain new dark magic powers.  These powers coupled with her own which included dark arts, communicating with demons, and using spells made her formidable when protecting her people from persecution by the local Baron and his men.  The Baron hated their gypsy magic.  When she used her new power, a side effect occurred that killed the children in her village, making Mephisto stronger.  Realizing a curse had been placed upon her, she renounced her power. However, she was mortally wound by one the Baron’s guards around the same time.  She made her way to a nearby forest and died in Werner arms.  Cynthia made Werner promise not to let Victor fall to same path she did. Her soul was trapped in Mephisto’s realm, to be tortured for all eternity.

In the present, Doctor Doom spends every Midsummers Eve, when the barrier between Earth and other realms are thin, challenging Mephisto for the right to free his mother’s soul.  Therefore, it is highly concerned that the device meant to contact the netherworld was invented by Victor so he could speak with his mother.