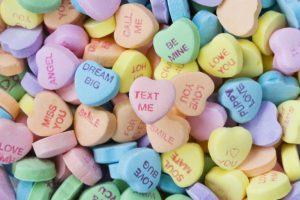 When we think of February we think of President’s Day, Groundhog’s Day, Heart Disease Awareness month and Valentine’s Day, to name a few events.  I think all of us agree though, that we remember Valentine’s Day the most.  Maybe it was a card you received or you just loved all the candy you got.  One of the most famous or most “talked” about candy is the Conversation Hearts which came from the Necco company which was bought from Spangler in 2018.  (Spangler is known for Dum-Dum’s, Starburst, and Candy Canes).

The Necco company which started in 1840, used to sell the popular Valentines conversation hearts candy until recently.  Spangler Candy Co. took over the rights to Necco’s iconic brands and said they would return in 2019.  I haven’t seen or heard if this was the case.  Even if they don’t come back under this brand name have no fear, Brach’s continues to sell the exact same candy.

Here are some fun facts about this time tested Valentine candy.