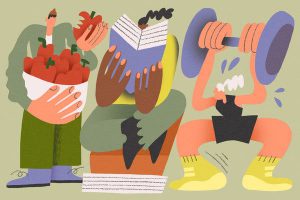 The end of the year is always a time for reflection. We gather with family and friends, eat good food and exchange gifts, and are given the opportunity to share our past experiences and take-aways from our years. After self-reflection, there naturally comes a time where our minds turn to what comes next; what we wish we had done the previous year becomes what we want to do in the coming year. The idea of these “New Year’s Resolutions” is pretty ubiquitous in today’s society, at least in the Western Hemisphere, but not many of us know the origins of this practice.

The practice of making new year’s resolutions can be traced back about 4,000 years ago to the peoples of ancient Babylon. Their “new year” started with the beginning of the farming season, around mid-March, not January. They would hold a 12-day religious festival called Akitu, where they would crown a new king or once more pledged their loyalty to the current reigning. During these festivities they would also make a sacred promise to the gods to return borrowed items and pay off debts, giving them a fresh start for the new year.

The Romans started a similar practice about 2,000 years ago, around the time Julius Caesar established January 1st as the start of the new year. January got its name from the god Janus, the god of doorways, paths, beginnings and ends. During January, Romans were encouraged to make offerings to Janus to usher in the new year, promising good conduct and self improvement for a productive and fruitful new year.

Medieval times had their own interpretation of this tradition as well, where knights would take the “Vow of the Peacock” towards the end of the Christmas season. Peacocks and pheasants were romantically referred to as “the peculiar diet of valiant knights and heart-stricken lovers” by Charles Dickens in writings about medieval times. This was because of their colorful feathers and majestic displays, much in the same way a king might wear fancy robes or jewelry. In their new year celebrations, peacocks would be cooked as the centerpiece of a great feast, and knights in attendance would make a vow of chivalry to the bird before it was carved up and eaten.

In more recent times, most large religions have some version of this practice, such as the Jewish Yom Kippur, the “Day of Atonement”, or the season of Lent in Catholicism. However, most practices of New Year’s Resolutions these days are a secular practice, meaning it’s done as more a cultural thing and not because of a belief or religious practice. Whatever reason you have for creating a New Year’s Resolution, remember to keep your goals realistic, and keep in mind the areas in which you succeeded last year. Much like people have for centuries before us, move into the next year full of goals and ambition. Have a happy 2020!