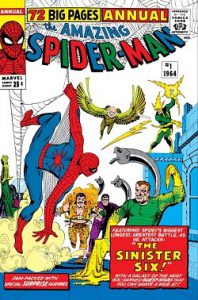 Doctor Octopus breaks out of prison and decides that the best way to get revenge on Spider-Man is to gather other supervillains who seek revenge against the webslinger. He recruits a team of Mysterio, Electro, Kraven the Hunter, the Vulture, and Sandman to take down their nemesis.  Meanwhile, Spider-Man is worrying about his spider powers abruptly fading.  Spidey decides to be super cautious on his way home, in case he is defeated by one of his enemies and they discover his secret identity.

Peter wanders across the streets of New York City contemplating the stress of being Spider-Man and how it has changed his life in a negative way.  Lost in thought, Peter neglects to attend school that day.  Midtown High calls Aunt May, informing her of Peter’s absence.  Aunt May calls Betty Brant for help, and the pair head to The Daily Bugle offices to ask J. Jonah Jameson if he has seen or heard from Peter.  The Sinister Six had devised a plan to kidnap Betty Brant at the Daily Bugle as bait for Spider-Man. Once there, they decide that two is better than one and capture both Aunt May and Betty Brant.

Peter arrives at the Bugle in time to see the Vulture handing  a message to Jameson that the Sinister Six have gone to six different locations, each with a clue as to where Aunt May and Betty are being held.  The other New York City based superheroes go searching for Spider-Man.  These include: The Avengers (Captain America, Iron Man, Thor, Giant-Man, and the Wasp), The Fantastic Four (Mister Fantastic, Invisible Girl, Human Torch, and Thing), The X-Men (Cyclops, Marvel Girl, Angel, Beast, Iceman, and Professor X), and Dr. Strange.  Peter realizes, powers or no powers, he has to go out as Spider-Man and save Aunt May and Betty.

The first location is a power plant owned by Stark Industries.  Spidey tangles with Electro and realizes that his powers have returned and easily defeats the villain.  As he learns of the next location, Iron Man offers to assist him. Spider-Man refuses, and proceeds to the next location.

The webslinger next battles Kraven the Hunter and his three tigers in Central Park.  Spidey easily dispenses with the four foes.  The Human Torch offers his assistance, but Spidey refuses.  The next location features Mysterio and robots of the X-Men the villain had created. Spider-Man again dispatches the foes with ease, however, the next clue is sent a blaze but the webslinger extinguishes it with his web fluid.

Next up is Sandman, who is in an airtight room. Spidey defeats him due to his superior lung capacity. Up next is the Vulture, and Spider-Man dispatches him in a battle high above the city.  Spider-Man now has the final clue and prepares to do battle with Doctor Octopus, who has been hiding Aunt May and Betty the entire time.  Aunt May is completely unaware that she has been kidnapped and assumes that they are merely houseguests of Dr. Octavius.

Spider-Man and Doctor Octopus begin their battle in a giant fishbowl.  Here Doctor Octopus proclaims that he is fighting in his “natural habitat.” Spider-Man carries the day by filling the entire bowl with webbing, which tangles up Octavius and stops him from moving.  Spidey then frees Aunt May and Betty.  Leaving the scene and getting back into his civilian clothes, Peter meets up with the ladies.  Aunt May scolds Peter for missing class.  Jameson has been made a fool once again by Spider-Man, as he must print a story on the webslinger’s heroics battling the Sinister Six.  As for the Sinister Six?   They are left in a jail single cell, fighting amongst themselves as to whose fault it was that they failed in their grand scheme to take revenge on Spider-Man.