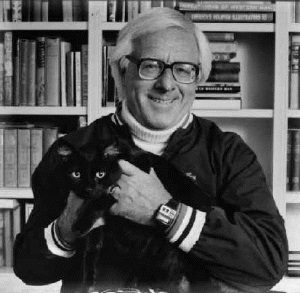 With short story collections like The Autumn People, The October Country, or One More for the Road, it’s no wonder that Ray Bradbury comes to mind whenever fall comes around. Some of the first short stories I ever read were Bradbury’s works, and they too are reminiscent of fall, not just in title. The manner in which he wrote many of his stories carries with it a strange sort of energy. Something about how the seasons change, leaves turn, and the days get shorter is perfectly captured in his works. His writing combines a sense of unease and suspicion with an acceptance of change and an optimism for the future.

Bradbury grew up in the Great Depression, and spent most of his teens reading the works of H.G. Wells, Jules Verne, and Edgar Allen Poe. Even from a young age, he knew he wanted to write, and spent much of his late teens writing horror stories in an attempt to be like Poe. This enthusiasm carried right into his 20’s, where upon getting rejected admission to fight in WWII due to poor eyesight, he found himself free to pursue writing. By the age of 24, he was a full-time writer, and his first collection of short stories, Dark Carnival, came out not long after.

He developed a particular style once called “midwest surrealist”, often writing stories that conveyed moods through strange and sci-fi influenced worlds of his own creation. To me, one of the most notable examples of this are his Martian Chronicles, a series of stories about homesteaders on Mars. There’s no continuous theme; in fact, many of the stories are self-contained and some of them don’t even take place on Mars! Instead, each one explores the fears and doubts, wonders and curiosities one might expect of someone on an alien world, or how they might react to strange and hostile lands, all within the surreal scope of his own particular brand of surrealism.

The only theme I think I can truly say is recurring in Bradbury’s short stories is an exploitation of the human psyche. His stories tend to find an insecurity or worry that people commonly have, and twist it into a thriller or weird story in a way only he can. In The October Country, this is explored through stories like The Small Assassin, where a woman begins to fear her own child; or The Man Upstairs, where a young boy begins to grow suspicious of his upstairs neighbor. I don’t want to go into too much more detail, but if these hooks drew you in or made you curious for more, I’m sure you’d love many of Bradbury’s short stories.