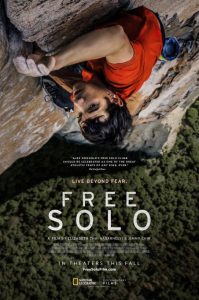 “Free Solo” is the 2018 documentary film in which professional rock climber Alex Honnold attempts to conquer the first free solo climb of the infamous El Capitan in June of 2017.

El Capitan is a vertical rock face at Yosemite National Park that measures close to three thousand feet from base to summit. Free solo climbing is a form of rock climbing where the climber – also known as a free soloist – performs a climb alone without the aid of ropes, harnesses, or other equipment that might protect a climber from a fall. Free soloing forces a climber to rely solely on physical strength and climbing skills, takes an extreme amount of focus and energy, and is extremely dangerous due to the lack of safety equipment used.

“Free Solo” not only documents Honnold’s attempts to climb El Capitan, it highlights what life is like for the singularly focused climber and explores the facets of his unique personality. He is a college dropout and a bit of a loner. He lives in a van and travels constantly. Throughout the documentary, we see him sleeping, working out, and cooking meals in his van – his primary residence – frugally eating simple meals with a spatula directly out of the pan. He is not someone who holds onto material possessions and does not seem to need a lot from human relationships. Part of the film focuses on his bourgeoning relationship with a new girlfriend, as well as acknowledging what it is like for her to date someone who could die at any moment. Even the director, Jimmy Chin, and the close-knit group of climbers and friends of Alex wrestle with the fact that – if Honnold succeeds and conquers El Capitan, they will have captured something historic and amazing on film. If he fails in his task, it means they will capture his death.

The daring cinematography in “Free Solo” is due primarily to the fact that the camerapeople are suspended from ropes, hanging from the rock face. While taking in the incredible views and amazing scenery, you cannot help but hold your breath while watching Honnold attempt his climb. This film and others like it can be found in the Bellevue University Library General Collection and may be borrowed for one week, with the option to renew once.