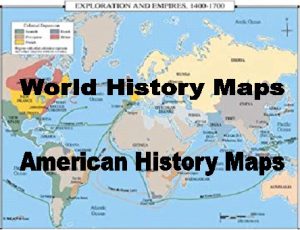 Time, geography, and culture are intrinsically connected and tell the story of our race and the civilizations we have created. Two new LibGuides delves into the concept in a visual way with “World History Maps” and “American History Maps.” These LibGuides present the human story in a way not often depicted in our epoch, not through the written word or an audio visual presentations, but through maps over time.

Although these LibGuides are two separate entities, both tell the same intertwined story. World History maps focuses on Pre-history, First Civilizations, the Second Wave of human civilization, the Third Wave of civilization, the Early Modern World, the age of European Expansion, and the turbulent and transformative 20th Century. American History maps initially engages in telling the story of Pre-Columbian America and then moves to specifically focus on the history of the United States beginning with the Colonial period and moving through the Revolutionary War, Western Expansion, the Civil War and Reconstruction, the Industrial Era, Modern America, and America since 1945.

To access these LibGuides or to look at our full list of LibGuides go to http://libguides.bellevue.edu/. For more information about LibGuides, please contact the Bellevue University Reference Desk at library@bellevue.edu, 402-557-7313, or by using 24/7 Chat service found on the library website.