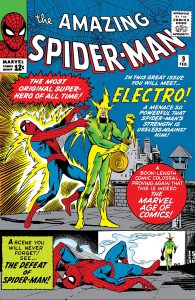 Spider-Man is dashing off like a teen super hero on a mission past a group of pedestrians.  The NYPD notice him and are pleased he is on their side as they are in pursuit of a gunman, but the wall crawler pays them no mind and continues on his way.  The real reason Spidey is ignoring everyone is that he is desperate to obtain a prescription for his beloved Aunt May.  In the next scene Peter is sitting at the bedside of his ill aunt.  At the same time a new menace announces himself: Electro!  The villain charges himself up with electricity and attacks an armored car transporting a shipment of gold.  Electro uses electric shocks to frighten the guards and surrounds them with a ring of electricity.  With these electrical deterrents in place, Electro takes possession of his ill-gotten gains.

The next day Peter wakes up to see that is Aunt’s health is worse and calls the doctor to see if she can go to the hospital.  Aunt May is concerned Peter cannot take care of himself, but he reassures her he can.  Later arriving at Mid-Town High, Peter is teased by Flash Thompson, but he is so concerned with his aunt’s wellbeing he completely ignores it.  Returning home, Peter finds Betty Brant (Peter’s current girlfriend) visiting.  Wrecked by his thoughts, Peter leaves without taking Betty home.

While this drama is dominating Peter’s life, Electro commits his second round of robbery.  Electro heads to the Forrest Hills Bank to make a withdrawal.  Using his electro shock powers, he holds the bank manager and his guest J. Jonah Jameson (who would have guessed) busy while using his powers to open the time lock on the bank’s vault.  The next day the Daily Bugle proclaims that Spider-Man and Electro are one in the same person.  Peter decides he must don his Spider-Man costume and track down Electro.  Failing to find Electro twice, Spider-Man eventually catches up with the villain but is defeated by the new supervillain.  Once again the Daily Bugle claims that Spider-Man and Electro are the same person forcing the public to question who Spider-Man actually is.

Electro makes his next move by heading to the West Side House of Detention in downtown Manhattan to release some prisoners and force them to be his stooges.  Upon hearing the news of Electro’s latest stunt, Jameson makes his way to the detention center in hopes of seeing Spider-Man there to confirm his presumptions about the wall crawler.  Peter is currently visiting his aunt at the hospital but is desperate to go to the detention center and take photos for the Bugle.  Eventually Spidey shows up and Jameson realizes that Spider-Man and Electro are two different people.

To take down Electro, Spidey has created rubber gloves and boots to insulate himself from the villain’s electric attacks.  A lengthy brawl between the webslinger and Electro and the inmates ensues, witch Spider-Man prevailing thanks to a fire hose. The villain defeated, Spider-Man removes Electro’s mask believing that he may know who the villain is.

Peter sells the photos he took of Spider-Man and Electro’s battle to Jameson, bringing in a solid amount of money to help out Aunt May.  The story ends with Peter and Betty having trouble coming up the with right words to say to each other.