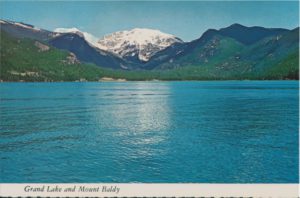 For 50 years, I have collected postcards. It is an inexpensive hobby; they are easy to transport, most of them have vibrant colors, and a single glance years later can transport you to a time and place that you found to be breathtaking.

In 1974, most of Dad’s extended family met for a reunion in Grand Lake, Colorado for a memorable week. My cousin Kelly was in Grand Lake all that July doing summer stock with the repertory company that has been there for decades. We didn’t see much of her outside the theater, but just looking at the Grand Lake postcard reminds me that I saw her portray Eliza in “My Fair Lady” and be one of the stage managers (as well as part of the chorus) of “West Side Story”.

In October 1978 I took a solo trip to the Atlantic coast on a three-week research trip. Both 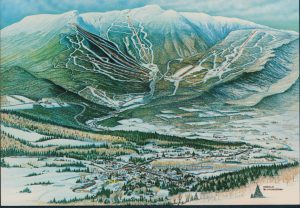 maternal and paternal sides of my Mom’s family spent several generations in Connecticut, Vermont, and New York, and I totally enjoyed myself delving through dusty ledgers in city halls and public libraries to verify names and dates of my ancestors from the 17th and 18th centuries. Since I couldn’t see “Sound of Music” often enough during those years, I stayed in Stowe Vermont one night and drove up to the Trapp family lodge the next morning.

In May 1980, my BFF Pam and I pointed her car north and drove through Minnesota and Sault Ste. Marie and into the Canadian province of Ontario. This was in the days when Americans didn’t need to show a passport to enter Canada.  We meandered through backroads as well as a hair-raising journey on the Toronto interstate before stopping by Niagara Falls. We saw it first from the Canadian side, and I added this postcard to my collection. 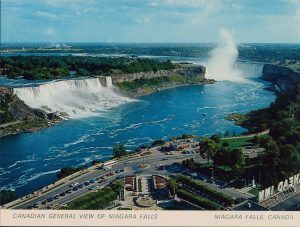 Joining my husband at his duty station in southeastern West Germany from 1985-1986, we were able to take two family vacations with our preschoolers. The first was to the holiday town of Garmisch Partenkirchen in the Alps. One of the tours that we took on that trip was to Neuschwanstein, an over-the-top location in extreme southern Bavaria. No photo could do justice to the vast rooms filled with huge Wagnerian murals, ornate columns, and chandeliers, so this postcard is one of several that I bought . 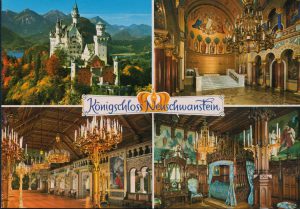 The other European family vacation we took was to the Netherlands. I really enjoy postcards that contain more than one view, and this one has scenes from Delft, Den Haag, Amsterdam, and the Keukenhof. 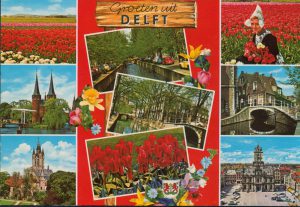 Some of my postcards were sent to me by friends and many of them I bought for myself. Some are in scrapbooks and some are in a huge box where my treasures from travel are stored. They are one source of quiet pleasure. It is harder to find them now, because so many travelers use their phones to personalize their memories. But for me, the postcard photographers have a rare talent to catch the grandeur of a scene and make a memory.