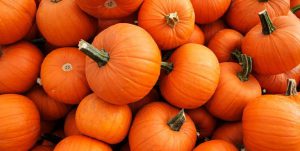 In the United States, pumpkins go hand in hand with the fall holidays of Halloween and Thanksgiving.  Pumpkins are nutritious, rich in vitamins, low in calories, fat and sodium, and are versatile.  Pumpkins can be used in a variety of soups, desserts, breads and, of course, the all-American pumpkin pie.

Pumpkins are a member of the gourd family, which includes cucumbers, melons, cantaloupe, watermelons and zucchini.  Indigenous to the western hemisphere, pumpkins are one of America’s oldest native crops, originating in Mexico and North America.  Historians have dated pumpkins back to as early as 7000 to 5500 B.C.

In addition to enjoying the dishes made from pumpkin-related recipes, many families enjoy the tradition of pumpkin carving.  The tradition of food carving began as a Celtic tradition to bring light into homes for the good spirits. However, instead of using pumpkins, turnips and squash were used.  When the Irish immigrants arrived in America, they called them Jack O’Lanterns and continued with the autumnal celebration of food carving using pumpkins instead of the turnips and squash from their native homeland.

Interested in trying out some pumpkin recipes this fall? The Bellevue University Library has some wonderful cookbooks.  All cookbooks can be borrowed for three (3) weeks and can be renewed twice.  Here are a few recipes that you can try: