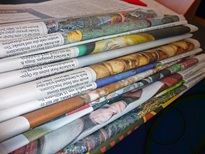 There’s nothing quite as powerful as the spoken word or the impact free speech has on every citizen.  October 6-12, 2019, is “National Newspaper Week” and celebrates the effect newspapers have in our communities.  It has been observed the first full week of October since 1940 and this year’s theme is “Think F1rst—Know Your 5 Freedoms.”

These freedoms–better known as the First Amendment include:

Newspapers help readers express themselves and advocate for their causes.  The press has been challenged many times in the courts since the thirteen colonies declared independence from Great Britain.  A few of the well-known cases that challenged the freedom of press are:

The State of Nebraska has over 100 newspapers dedicated to protecting the First Amendment.  For a listing of all newspapers in every state go to the Genealogy Bank to find one near you.  The Bellevue University Library subscribes to Newspaper Source Plus, a database containing millions of articles from 1,200+ resources, including transcripts from popular news, television, and radio sources. In addition, check out the resources below to learn more about the power of the press and/or how you can help promote the freedom of speech.

The Bill of Rights Institute