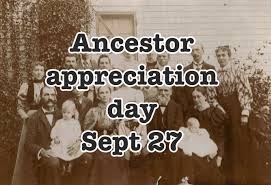 Since I have been researching my family heritage for 50+ years, I was surprised to learn this summer that September 27 is designated as Ancestor Appreciation Day. In honor of this annual event, I’ll focus on the families of my grandmothers. I encourage readers to also take a moment to recall family members who made you who you are.

Both were western Iowa farming families who arrived to begin their lives in that state between 1874 and 1909. Both my grandmothers and their several siblings were encouraged to hold fast to their faith, value education, and rely on and support each other.

My paternal grandmother’s parents were both emigrants from the Kingdom of Hanover in Germany, which bordered on the North Sea. They made the voyages from Bremerhaven to the U.S. in 1856 (Great-Grandpa Wilhelm was 6) and 1862 (Great-Grandma Etta was 5). Both families lived briefly in northern Illinois, then were in Jones County Iowa after the Civil War ended. Wilhelm left in 1873 to drive a wagon across the state and purchased 80 acres of railroad land in Plymouth County. He sent for Etta, and they were married near LeMars in September 1874. They battled the prairie and the grasshopper plague in their early married life and had seven sons and four daughters on the Elgin Township farm. 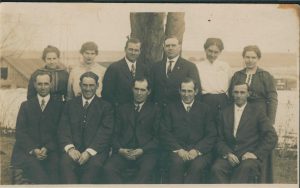 Grandma Kate was born in November 1887, the second daughter and eighth child. She and her sisters sang quartets at the country church they attended, and she completed at least 8th grade. She married a distant cousin in April 1909 at that church,  then moved south to Monona County to begin their own family. Grandma Kate and Grandpa Ed farmed various locations in that county and raised three sons (my Dad was the youngest) and a daughter. All of these four graduated from high school and left the farm shortly after. They became a logger, an employee of General Electric, a nurse, and an employee of the Iowa Department of Transportation.  Grandma Kate raised her children to be hardworking, to enjoy music, to show respect for their elders, and to be loyal to each other.

My maternal grandmother’s forebearers were Yankees who emigrated from England to New England in the 1630s. Their basically westward path meandered from Massachusetts to Connecticut to Vermont to Ohio to Illinois to Kansas before settling in Woodbury County, Iowa in 1881 and 1909. Both of Grandma Mabel’s grandfathers fought for the Union in the Civil War, and one was a prisoner at, and escaped from, the infamous Andersonville prison. Several of her ancestors were schoolteachers.  Grandma Mabel’s parents were married in Woodbury County in March 1898 and moved to central Minnesota shortly after the turn of the century. She was their oldest daughter and third child, and was born in May 1902 in Becker County, Minnesota. She eventually had six brothers and two sisters. The family moved back to Woodbury County in 1909 when Mabel was 7 and built a farmhouse on 120 acres west of the village of Smithland. The house still stands and has remained in the family for almost 110 years. 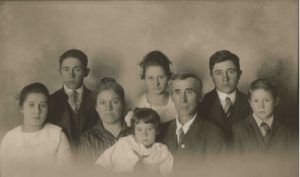 Grandma Mabel graduated from high school in 1919 and went to Cedar Falls for a year to earn her teaching certificate. She taught for two years in the country schools of Woodbury County before marrying her childhood sweetheart in May 1924. Grandma Mabel and Grandpa Otis had two sons and two daughters (my Mom was the youngest) before she died of pneumonia in December 1930. According to her still-grieving widower in the 1970s and 1980s, Mabel was smart, musical, fun-loving, and loyal to family and friends.

Do you have fond or vivid memories of an ancestor? Did you grow up hearing family stories of the exploits of an ancestor? Take a moment on this Ancestor Appreciation Day to give thanks for them.

If you have questions about your family heritage, members of the Bellevue University community have free access to the Ancestry Library Edition database.

If you need assistance to begin or continue your search, please contact the Reference staff at 402-557-7313 or library@bellevue.edu .