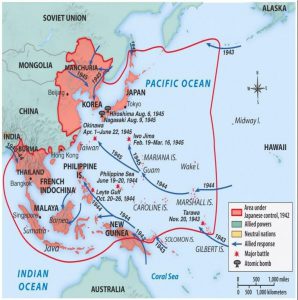 74 years ago this summer, the world was still at war. Victory in Europe took place in early May, but the war in the Pacific threatened to continue for some time. With the capture of Okinawa in June 1945, the Allied forces were within striking distance of the home islands of Japan. Tremendous losses of Allied service personnel and citizens of Japan were anticipated when Japan itself was invaded. An alternative to physical invasion of the home islands presented itself in mid-July, when the scientists involved in the top-secret Manhattan Project successfully detonated the first atomic bomb in the New Mexico desert.

Less than two weeks later, on July 26 the Allies broadcast the Potsdam Declaration, which demanded that the Japanese agree to an unconditional surrender. This was refused by Japanese Prime Minister Suzuki on July 28. Taking into account the steely determination of the Japanese rulers and the devotion of the people to their emperor, and the loss of life that was calculated to occur if a Japanese invasion was necessary, on August 6 President Harry Truman ordered that the atomic bomb be detonated over the city of Hiroshima…and the global future possibilities for total war were ever changed. Since there was no response from Japan after the complete devastation of Hiroshima, on August 9 Nagasaki was also destroyed.

On August 10, Japan’s War Council submitted a formal surrender to the ambassadors of the Allied countries. But the communication did not reach some commanders, and two U.S. ships were sunk east of Okinawa on August 12. 74 years ago today, on August 14, Japanese radio announced that an Imperial Proclamation was forthcoming that Emperor Hirohito accepted the stipulation that Japan would submit to an unconditional surrender. On August 15, the Emperor did broadcast the capitulation on Japanese radio.

General Douglas MacArthur would have been the commander of the invasion of the home Japanese islands (code name Operation Olympic) had it been necessary. President Truman authorized General MacArthur to accept the Japanese surrender; MacArthur, as Supreme Commander for the Allied Powers set the date of surrender for September 2 so that representatives of all of the major Allied powers would be able travel to Tokyo to participate. The formal surrender took place on the deck of the USS Missouri  in Tokyo Bay. A copy of the document signed on the Missouri appears below.

There are several dates that could be considered the end of World War II; August 14 is one of them. 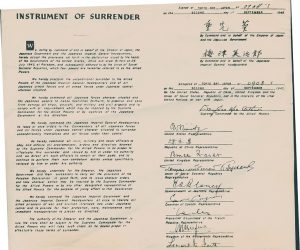