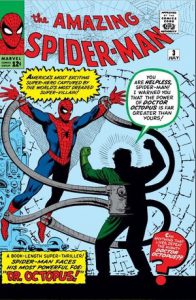 Spider-Man apprehends Charlie and two of his friends as they attempt to rob a warehouse.  Using the Spider Signal on his belt the web slinger surprises the would be thieves and webs them up for the police.  Elsewhere, the brilliant Otto Octavius, referred to by his colleagues as “Doctor Octopus” for his remote controlled mechanical arms he uses to handle radioactive materials, is conducting research at the U.S. Atomic Research Center. An explosion occurs at the location, and Dr. Octavius’ body is fused with his mechanical arms and the radiation has altered his brain.  When he awakens at the Bliss Private Hospital, Octavius realizes he can control his mechanical arms telepathically. With his brain altered from the explosion, he decides to take over the hospital.  J. Jonah Jameson catches wind of the trouble occurring at the hospital and orders free lance photographer, Peter Parker, to head there immediately and get some photographs for the Daily Bugle. Slipping into his Spider-Man costume, the teen makes his way to the hospital and finds that the staff is being held hostage by Doctor Octopus. The wall crawler gets into a fight with Dr. Octopus and is badly beaten, however, the captives were able to escape due to his efforts.

Following his defeat of Spider-Man, Doc Oct. takes control of the U.S. Atomic Research Center, and more importantly its computer, and now has control of the greatest source of atomic power in the United States.  The government asks the Fantastic Four to retake the U.S. Atomic Research Center but decline due to other commitments.  Peter is pretty down in the dumps after his defeat at the hands of Dr. Octopus but is inspired by a speech given at Midtown High by the teenage member of the Fantastic Four: The Human Torch, aka Johnny Storm.  Johnny is unable to flame on due to a virus and Peter realizes he has what it takes to defeat Dr. Octopus and sets out to do so.

Spider-Man makes his way to the lab at the research center and builds two contraptions with wire and chemicals.  When Dr. Octopus finds the teenage hero, Spidey throws one of devices he created at the villain.  This action melts two of Doctor Octopus’ mechanical arms together.  Next the web slinger shoots webbing at Doctor Octopus’ glasses, temporarily blinding him (a fairly common trope in any Spidey vs. Doc Oct. fight across most media) making it easy for him to knock the villain out.  With Dr. Octopus in a state where the police can easily arrest him without concern of physical harm, Spider-Man meets up with the Human Torch and thanks him for the inspiring speech.  Fully cured, the Torch has no idea where the comment came from.  The next day the Torch returns to Midtown High showing off is flame powers.  Peter sits back with a smile on his face feeling an abundance of confidence about his burgeoning super hero career.