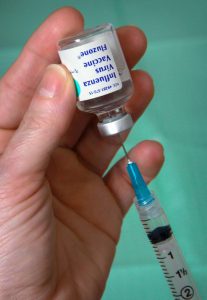 August is National Immunization Awareness Month. Championed by the Centers for Disease Control and Prevention, this observance highlights the importance of vaccines–not only those that should be taken early in life, but those that can be taken later in life, as well. Vaccines can prevent numerous diseases, including chickenpox, hepatitis A and B, HPV, measles, mumps, polio, and whooping cough. The National Immunization Awareness Month website contains numerous resources not only for patients and parents, but also for healthcare professionals.

It is vital to note that, while vaccines are not risk free, there is no link between them (specifically the measles, mumps, and rubella vaccine) and autism and bowel diseases, like Crohn’s. This belief has its roots in the research and publications of Andrew Wakefield, and led to a decline in vaccinations, and accordingly, a rise in serious illness and death from preventable diseases. Wakefield’s findings have never been reproduced by other researchers in the field, and he was ultimately struck from the UK medial register for dishonesty, misconduct, and unethical behavior, after he was reported to have previously undisclosed financial conflicts of interests, alongside other breaches of ethics. (For more on Wakefield, see the links below under Further Reading.)

Getting vaccinated not only protects you, but also protects your community. Vaccines are not for everyone–those with vaccine allergies and those with compromised immune systems (for example, due to cancer or HIV) cannot take vaccines, and thus rely on the overwhelming majority of people living in their community to be vaccinated. This is a concept called herd immunity (or community immunity)–if a certain high percentage of people in a population are vaccinated than the population as a whole will be resistant to the spread of contagious diseases. Depending upon the disease in question, the herd immunity threshold varies from about 83% to 94%.