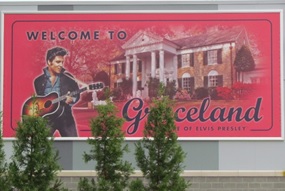 Every August, Elvis Presley fans gather in Memphis, Tennessee to celebrate the music, movies and legacy of the King of Rock & Roll.  This celebration is appropriately labeled “Elvis Week.”  This year the pilgrimage began on August 9th and runs through August 17th.  Today, August 16th, marks the 42nd anniversary of his death and the activities range from tours leaving Graceland to Tupelo Mississippi (his boyhood home), “Meet n Greets” with tribute artists, 5K run, concerts, and much, much more.  One thing is for sure, you will need to be prepared for traffic and crowds as approximately 35,000 people are expected to visit Graceland during the week.  To help navigate the activities and to enhance your experience, download the app and start enjoying the festivities.

For those of you who may not know much about Elvis—here is a little synopsis of his impact to popular culture and a few fun facts about the King of Rock & Roll.  Elvis Aaron Presley is perhaps one of the most celebrated artist of our time.  His presence and contributions can be found in many cities around the world anytime of the year.

So, if you cannot get to Memphis to celebrate Elvis Week, check out these resources to learn more about the phenomenon more commonly known as “The King!”