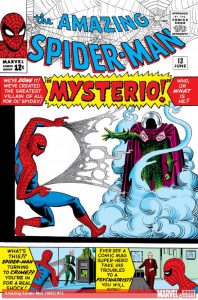 Place of Origin: Not stated

Synopsis of First Appearance: “The Menace of… Mysterio!”

Throughout New York City stories begin popping up that Spider-Man is robbing several locales at night.  Peter is concerned that he may be developing multiple personalities and is going on a crime wave as Spider-Man when he is asleep.  He considers seeing a psychiatrist but fears that he might reveal his secret identity.

Later, Peter makes his way to the Daily Bugle to see if J. Jonah Jameson can give him a loan to help him and his Aunt May pay the mortgage.  While at the Bugle offices he snaps at Betty Brant, Jameson’s secretary, when she asks him why he has not sold any photos lately.  Jameson tells Peter that if he needs money he better take some pictures worthy of the Bugle.  Heading out as Spider-Man, he finds little luck and only succeeds in having an angry mob chase after him.  Peter then heads for class at Midtown High where Liz Allan is sporting a new hairdo and is doing her best to impress her classmates with it.  Flash Thompson, expecting a positive response, remarks that she is so beautiful with her new hairdo that he could not recognize her. However, Liz snubs him.

Back at the Daily Bugle, a costumed man named Mysterio arrives and tells Jameson that he will bring Spider-Man to justice.  Vanishing moments later with a puff of smoke, Jameson finds a note from Mysterio that reads that the Bugle should print a challenge to Spider-Man that he should meet Mysterio at the Brooklyn Bridge.  Peter as Spider-Man takes the challenge but is defeated easily by Mysterio’s perceived magical powers.

The next edition of the Daily Bugle heralds Mysterio as hero.  Later that day Mysterio appears once again at The Daily Bugle offices for photo op, where Peter places a Spider-Tracer on New York’s newest hero.

Using the Spider-Tracker, Spidey discovers Mysterio at his hideout and explains to the web slinger how he is a special effects artist who decided to turn to a life of crime.  He was able to create devices that mimic Spider-Man’s powers and abilities, thereby framing the young superhero.  But Spidey gets the upper hand when he informs Mysterio that he has recorded their conversation.  A fight ensues and Mysterio uses smoke to defeat the wall crawler, but Spider-Man uses his spider-sense to take down the villain.

Spider-Man turns Mysterio over to New York’s finest.  Jameson is enraged with news, Spider-Man has made a fool of him again!  However when Peter arrives with photos of the battle between Spider-Man and Mysterio, Jameson has an instant mood change. Later that day Spider-Man arrives in Jameson’s office and webs to the ceiling and mocks the publisher for making a fool of himself again with his anti-Spider-Man stories.